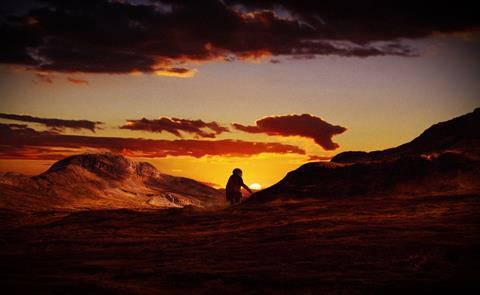 Why limit a film to naturalistically depicting an outsider’s struggles, stepping into the realm of cathartic fantasy or charting an against-the-odds sports narrative when you can do all of the above at once? That’s the question writer/director Johannes Nyholm asks with his feature debut, The Giant — and answers in a visually and emotionally memorable fashion.

Nyholm’s symbolism is blunt and blatant. Thankfully, it is also effective.

His varied pieces may fit together a little awkwardly, from the dramatic and comedic, introspective and the expressive, intimate and expansive; however their cumulative impact is often moving and revealing. Indeed, following its premiere at Toronto, and showings in San Sebastian and London’s first feature competition, followed by a mid-October release in Sweden, it’s the film’s perceptive nature that could see it venture beyond the festival circuit.

After taking his shorts Puppetboy, Dreams from the Woods and Las Palmas to Cannes’ Directors Fortnight between 2008 and 2011, Nyholm’s debut feature doesn’t only strive to show that its protagonist is more than the sum of his parts; sometimes with a roaming, soberly-lit perspective, sometimes with warm, vivid, dream-like interludes, it endeavours to do the same itself.

Though unable to be understood by most around him due to autism and a severe facial protrusion, Rikard (Christian Andrén) makes his own case by his actions and his imaginings. Approaching his 30th birthday, he still yearns for the mother (Anna Bjelkerud) who abandoned him in shock upon his birth, but finds solace and structure in playing with a local pétanque group. Then, an accident renders him hospitalised, causing some of his cautious teammates to exclude him from their efforts to reach the Nordic Championships.

Helped by the kindness of his best friend Roland (Johan Kylén), Rikard optimistically perseveres, practicing by throwing iron boules in his tiny care-facility apartment. He’s convinced that success in the pétanque arena, even against a formidable Danish duo defending their title, is the path to a family reunion.

Just as the bleakness of his reality and the fragility of his body are intermittently expressed in shaky, blurry point-of-view shots, so is the lure of his inner wishes, complete with his own status as a gentle giant.

Of course, glimpses of Rikard’s visions of himself in such a large, lumbering state get to the heart of Nyholm’s contemplation of the conflicting urges to fit in and stand apart that undermine much of human behaviour. Whether applying the film’s title to a character who is clearly small in stature, juxtaposing his super-sized determination with the small-mindedness of others, or cutting away to his mother’s willfully enclosed state — and her pet bird’s attempts to fly free — Nyholm’s symbolism is blunt and blatant. Thankfully, it is also effective.

Cinematographer Johan Lundborg’s moves dexterously between visual styles, as edited together by former Lars von Trier and Susanne Bier collaborator Morten Hojbjerg, helping infuse Rikard’s tale with texture. As noticeable as The Giant’s aesthetic choices, is composer Björn Olsson work which perhaps wields a greater influence on the feature’s trajectory. With many of the film’s most resonant moments accompanied by a rousing, repeated, western-like refrain, its emotional journey beyond longing and sorrow becomes infectious.

As evidenced in similarly notable fare that deals with accounts of deformity and difference, such as The Elephant Man and Mask, the contribution offered by lead Andrén also leaves a significant mark. Here, it’s one of melancholy and motivation meeting in a near non-verbal space.