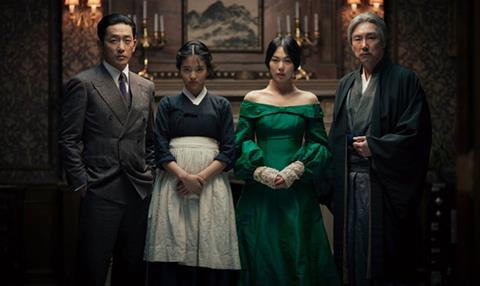 Park Chan-wook transposes Sarah Waters’ sapphic Victorian potboiler Fingersmith to Japanese-occupied Korea at the beginning of the twentieth century. And the fit is as perfect as one of the svelte, elbow-length kid leather gloves that become such a potent visual motif in a film which feels like a compendium of erotic imagery. Chan-wook downplays some of the complexity of Waters’ novel, stripping out a layer or two of double-crossing and intrigue that would have overcomplicated the third act. And he ups the ante on the sado masochism, plunging us into an alarmingly well-equipped torture chamber at a pivotal moment. But the film manages the tricky feat of both staying true to Waters breathless, page-turning prose, and creating a wholly persuasive new milieu for the story.

A frisson of attraction between Sooki and her mistress boils over into an urgent, exquisitely choreographed sexual relationship

The combination of playful humour, highly photogenic sex, exemplary costume design and an undertone of baroque cruelty makes this a title with strong commercial potential. The lesbian theme may limit its exposure in some of the more conservative Asian markets, but this should have broad appeal in other territories. This is a quality package which ticks plenty of the boxes for breakout success.

We are introduced to the characters in the first of two chapters, a structural device which is carried over from the book. Sooki (Kim Tae-Ri), the orphaned Korean daughter of a thief and an accomplished pickpocket herself, is leaving the thieves’ den to become a maid for Hideko (Kim Min-Hee) an innocent young Japanese woman who lives in isolation with an Uncle who hopes to marry her for her inheritance.

Sooki is part of a plan, formulated by an unscrupulous con man known just as The Count (Ha Jung-Woo), to lure Hideko into marriage, steal her inheritance and then lock her in a mental asylum. But there’s a hitch in the plot. A frisson of attraction between Sooki and her mistress boils over into an urgent, exquisitely choreographed sexual relationship.

Part two retells the story from Hideko’s point of view, and we learn that she is not quite the guileless little cherry blossom that we initially assume. She has been coached by her Uncle in the ways of the flesh – he has trained her to read, impassively, from the vast library of explicit texts with titles like Decadent Girls Sell Lingerie that he collects obsessively. An audience of select gentlemen shift awkwardly in their seats, whimpering slightly, as Hideko sweetly details an autoerotic asphyxiation snuff scenario.

The film is a technical triumph. The ornate, intricate production design of Hideko’s home is filled with subliminal – and sometimes overt – hints of dark perversion. Meanwhile, in Sooki’s thieves’ den, unwanted babies are stacked up like veal calves, and the shelves are cluttered with stolen goods. Costume is a lavish delight, combining a fetish-infused formality with a rich and luxuriant colour palette. Everything in this world becomes charged with a double meaning, from the buttons on Hideko’s blouse, to those gloves, to the thimble that Sooki uses to file the sharp edge from one of Hideko’s teeth.