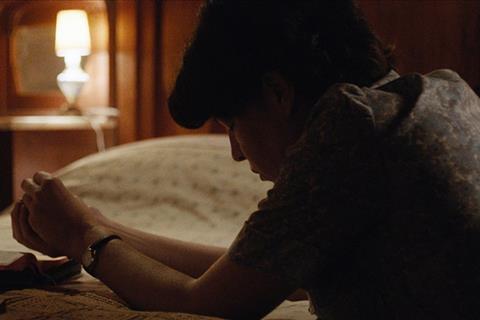 Forty-year-old Josefina (Anabela Moreira) has embraced the certainties of a life dedicated to the church and is just a few months away from taking her perpetual vows. But then she receives news from her family home in the Douro region: her father has died, her fifteen-year-old nephew Alexandre (Martim Canavarro) has been left with nobody to care for him. Josefina at first struggles to reconcile her religious calling with her duty to her family. But gradually nephew and aunt connect with an unexpected level of intensity. Deceptively complex emotions snake under the surface of this intriguing family drama, which tightropes precariously around the edges of dysfunction.

From the outset, Bonneville sets out to deliberately wrong foot the audience

The first feature from multi-award-winning short film director David Bonneville (Cigano, Heiko and L’arc-en-ciel), The Last Bath is a tonal conundrum which confronts the audience but largely refuses to judge its characters. Premiering in Tokyo, in advance of a release in Portugal, it’s a strong festival title which should generate debate and opposing moral stances with regards to the central relationship.

From the outset, Bonneville sets out to deliberately wrong foot the audience. A wide shot captures a figure running through a vineyard, the rows of vines planted in concentric terraces carved into the sunny hillsides. It’s a striking backdrop which could be lifted from a tourist brochure. But the score which accompanies feels ripped from a horror movie, with its discordant strings and jarring foreboding. The audience is immediately on edge, expecting a macabre reveal which never comes.

Instead, we join an assured Josefina as she sweeps through the corridors of the convent where she plans to spend her life, fine-tuning the altar flower display. Summoned back to the village for her father’s funeral, she hangs back as a neighbour offers words of comfort to the crying Alexandre. He’s convinced that his mother, Josefina’s sister, will return for him. But as the neighbour confides, she hasn’t been seen since the Our Lady of Agony festival, four years before.

How to connect with a grieving teenage boy? Josefina offers physical contact, gently bathing the Alexandre’s injured feet, carved up after he ran for help without sandals when he discovered his grandfather’s body. And this intimacy becomes their normality: Josefina robustly scrubs her nephew in the shower; he climbs into her bed at night after a bad dream. There’s something disconcerting about the way Josefina runs her hand over the boy’s flank, about the way she watches him as he sleeps. And yet Bonneville holds back from condemning Josefina or exploring the urges that she suppresses by mortifying her flesh, wearing a cilice – a jagged wire lattice – around her upper thigh at night.

The nature of the relationship between Josefina and Alexandre is called into question when his mother Angela (played by Moreira’s real-life twin Margarida Moreira), returns, claiming to be ready for a new start with her son. Josefina conceals the fact that she has made contact, although whether she acts out of concern for Alexandre, to protect her own newly-found sense of purpose as his protector or from darker motives is left to the audience to decide.