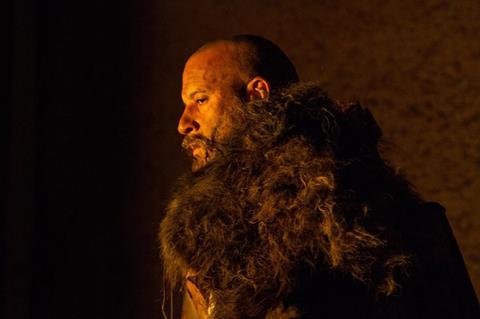 Vin Diesel stars as Kaulder, an immortal law enforcement agent charged with keeping the witches that live amongst us in line. When a deadly enemy from his past re-emerges, Kaulder must join forces with his natural foe, a young female witch-turned-Manhattan bar owner, in order to save humanity. Like its star, The Last Witch Hunter is big, overblown and frequently incomprehensible.

There’s a possibility that this film will tap into an audience taste for occult ass-kicking which was hitherto sated by the Blade series. However, the muted reaction to recent examples of the crone-slaughtering genre like Hansel & Gretel: Witch Hunters suggests that this kind of action-based witches’ brew might not be particularly appetising. A flash set of wheels notwithstanding, it’s hard to imagine that Diesel’s most loyal fan group, Fast and Furious petrol heads, will find much of interest here.

In pre-titles chunk of backstory, we are introduced to Kaulder, 800 years ago. He is equipped with a dread-locked beard and a flaming sword, and is preparing to do battle with the witch queen who has decimated the population, including Kaulder’s beloved wife and daughter. Kaulder and his fellow warriors venture into the heart of the plague tree, the witch queen’s lair. The set design features lots of ornamental jaw bones and gnarled roots. He manages to kill her, but in return, she curses him with immortality.

Fast forward to the present day, and we see Kaulder in action. He expertly wrangles a teenage witch who is causing havoc with a set of ancient weather runes. Then he returns to his well-appointed New York apartment to enjoy few minutes of exposition with his trusted friend and helper, Dolan 26th (Michael Caine). It’s worth noting that – immortality symbolism alert – Kaulder’s hobby is tinkering with broken antique clocks and watches.

Dolan is the latest member of a covert band of priests, called the Axe and Cross, who have sworn to serve Kaulder the immortal witch-botherer through the ages. Dolan 26th is about to retire, which, according to the rules of cinema, means that something unpleasant is highly likely to happen to him. And if the imminent retirement isn’t enough of a peril signifier, the thunderously doom-laden score leaves little room for doubt.

Before he is incapacitated, Dolan manages to leave a coded message suggesting that Kaulder needs to look far into his own past – to the point of his (un)death. To this end, Kaulder visits Chloe (Game Of Thrones’ Rose Leslie), a witch who runs a bar/bespoke potion emporium. Their relationship gets off to a tricky start when evil warlock Belial (Olafur Darri Olafsson) trashes the place using CGI tentacles in an attempt to prevent Kaulder from seeing his past.

That relationship supposedly improves when Chloe decides to stand against her own kind in order to defeat the massed forces of evil which have been stewing in ‘the Witch Prison’, located somewhere beneath Manhattan. However, the on screen rapport between Diesel and Leslie is never less than supremely awkward.

More convincing are the special effects and CGI creatures. A climax involving a swarm of ‘plague flies’ is arresting; and The Sentinel, a monster made entirely from bones, hell fire and righteous fury, is the stuff of which nightmares are made. It remains to be seen whether this will be enough to cast a spell on audiences .