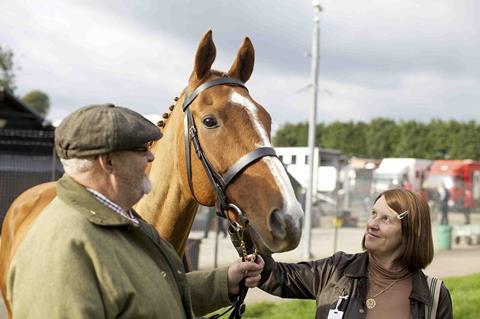 The sport of Kings becomes the preserve of the working-class in Dark Horse, a heartwarming true story that has been expertly crafted into an irresistible, emotion-charged documentary. The David and Goliath tussle between a horse-owning syndicate from a small Welsh village and the elite of the racing world celebrates the triumph of the underdog.

It is handsomely made with beautiful shots of both the misty Welsh valleys and the equine stars.

Accessible and well-paced, Louise Osmond’s film has plenty of obvious appeal for horse racing enthusiasts, animal lovers and a wider audience who will identify with the notion of ordinary people pursuing dreams that really do come true. Theatrical prospects are very promising following a world premiere at Sundance and Picturehouse will release in the UK in April.

Director Louise Osmond (Deep Water, Richard III: The King In The Car Park) proves once again  that she knows the value of a good story and how to tell it with sensitivity and economy. She brings out the best in her subjects and tells the tale of life-changing events with a warmth that is very appealing.

Barmaid and supermarket cleaner Jan Vokes recalls her conviction that raising and training a race horse was not beyond the wit of herself and fellow residents of a former mining village in Wales. In 2000, they began paying ten pounds each a week. They then found a thoroughbred mare, paid for the services of a stallion and hoped that there might be some potential in a gangly, spindly horse they called Dream Alliance.

It sound like the makings of an Ealing comedy but Jan, husband Brian, accountant Howard and other villagers united to defy all the odds, rearing the horse in a local allotment, paying training fees and watching it exceed all their expectations as it became a serious contender in some of the most prestigious races in the United Kingdom.

Osmond doesn’t labour the point but we are made only too aware that horse racing is a pursuit of a rich elite and that the Welsh syndicate were rank outsiders. Jan had raised dogs and birds and saw no reason she couldn’t succeed with another species. Even Dream Alliance’s trainers considered her blind faith little more than an eccentric lark until the horse started winning.

The film may be a little too on the nose with some of the musical choices (Tom Jones singing The Green, Green Grass of Home) but it is handsomely made with beautiful shots of both the misty Welsh valleys and the equine stars.

The seesaw between elation and heartbreak provides all the drama  the film needs and the expert testimony of the syndicate members lends a good deal of charm.

By the time we arrive at moments of do-or-die competition or life-threatening injuries, the viewer is entirely captivated. In fact, it is so easy to identify with the syndicate members that the story cries out for a dramatic makeover in the manner of Calendar Girls or Pride.