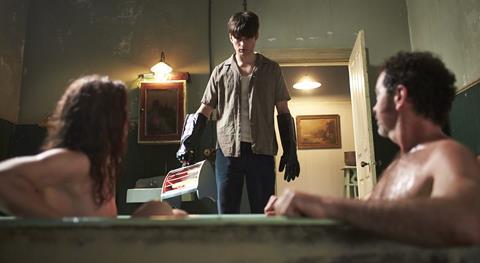 Note the capital letters. This is a fruity revisit to Patrick (1978), one of the over-the-top ‘Ozploitation’ movies featured in that parade of Aussie B (and C) movies so enjoyably chronicled in Mark Hartley’s award-winning 2008 documentary Not Quite Hollywood. For his debut fiction feature, Hartley teams up with Patrick’s original producer Antony Ginnane to recreate the outrageous ‘70s cinematic energy that his documentary celebrated. The newly capitalised PATRICK is as spookily Gothic and look-out-behind-you! crazy as the original.

It stands a good chance to travel well, with marquee names Charles Dance and Rachel Griffiths in fine form, and with plenty of the genre’s nudity, screeching strings and gory deaths. The opening night brought tense laughs and loud screams at the Melbourne Film Festival. Local release is due in October.

To the eerie Roget Clinic, a grossly understaffed and mouldy ex-convent, comes wiry Nurse Kathy (Sharni Vinson) to work for obviously demented Dr Roget (Charles Dance) and icy Matron Cassidy (Rachel Griffiths). Strangely, Kathy doesn’t immediately bolt, but agrees to help with the clinic’s dozen patients in a permanent vegetative state; “the long term comatose”, as Dr Roget calls them. There’s only one other employee, the sassy Nurse Williams (Peta Sergeant), so Kathy must also sweep out the musty corridors and staircases.

Star vegetative victim is handsome young Patrick (Jackson Gallagher) who resists Dr Roget’s every effort at rehabilitation but who begins to make telekinetic contact with the wide-eyed Kathy. Whereas in Patrick he sent her messages via an electric typewriter, here in PATRICK he makes modern use of Facebook, Google and various smartphones.

Hartley has fun with creaking doors, shock cuts, swooping cameras and innumerable Hitchcock references, mainly from Pyscho. He’s also had the great idea of employing Pino Donaggio as his composer. With such credits as Don’t Look Now, Carrie and Dressed To Kill, Donaggio delivers luscious, full-blooded backing throughout. In this enjoyable throwback to 1970s excess, Dance is unctuously creepy in the ‘Vincent Price’ role.