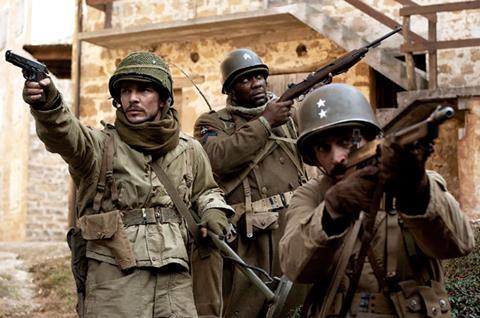 The part that Brazilian troops played in final year of World War II forms the intriguing and engrossing backdrop of Vicente Ferraz’s impressively mounted war film Road 47 which details the traumas facing a small squad of Brazilian soldiers in Italy in 1944. A high quality drama, it may lack epic gun battles and war scenes, but its slow-burn drama is absorbing and the delve into a part of Brazilian history little seen in cinema quite fascinating.

The film, which had its world premiere at the Rio International Film Festival, has the style and drama to appeal.

The start of the film succinctly explains the facts. In 1942 German and Italian submarines started sinking Brazilian merchant ships, killing a total of 1074 crewmembers. That same year, Brazil declared war on the Axis powers, and in 1944, 25,334 Brazilian soldiers crossed the Atlantic to fight in the Second World War.

The story is set around Christmas 1944 as a mine-detecting squad from the Brazilian Expeditionary Forces (FEDB), struggling to deal with the snow and cold and the fear of being killed, panic when under attack in the dark and flee the front line. Realising they could face a court martial, they try and make their way to a US forward observation post and re-enter the action.

Along the way the pick up a would-be Italian partisan Roberto (Sergio Rubini); Brazilian journalist Rui (Ivo Canelas) and injured German officer Mayer (Richard Sammel), and also find themselves forced to enter the War again when they come up against Road 47, a heavily mined strip where American forces have lost tanks and is the only route into St Giusto.

With the naturally sunny disposition of the Brazilians subsumed by fear of war and the freezing conditions, the film takes the familiar dramatic journey of dealing with how terrified men under fire deal with the circumstances around them. Guima (Daniel de Oliviera) provides the film’s voiceover as he talks (or perhaps writes, it is never clear) to his father, describing his fear and that fact that patriotism still also drives him. At the same time he adds: “Patriotism made our country crazy…but I didn’t even know we were part of this (war)”.

Though these men have come from a country far away to be involved in a war they know little about, they are also increasingly aware of the fact that men are all alike. They show compassion to the injured German, who they drag after them, with the nervy Piaui (Francisco Gaspar) initially against the man being there, but forming an odd bond as they discuss soccer (the German supports Wolfsburg).

As they slowly clear the mines on Road 47 and enter the town as heroes there is an underlying realistation that though they are all enemies in some form – Brazilians, Italians and Germans – they are also bonded by a fear of death and a simple desire to get home.

The film, which had its world premiere at the Rio International Film Festival, has the style and drama to appeal, with home entertainment (where war stories are still solid sellers) also appealing.