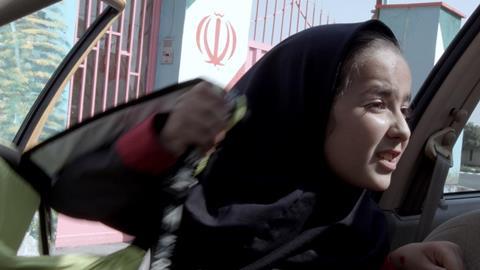 On paper, it looks like yet another Jafar Panahi exercise, outsmarting once again the Iranian authorities who have forbidden him from making films for the next 20 years. On screen, however, this is a delightful surprise, and though it is even more minimalistic than his last two illegal exports, This Is Not A film and Closed Curtains, it is also more mature, and better calibrated and - at the risk of annoying art house patrons who often hate this term - more entertaining than the other two.

More than ever before, Panahi’s composite picture of contemporary Iranian reality puts on a satirical shape, but the melancholy smile on the driver’s face – and in this case driver and director are one and the same person – is more eloquent than any piece of dialogue.

Following in the footsteps of 10 by Abbas Kiarostami (whose assistant he used to be), Panahi’s new film is shot entirely inside a yellow cab travelling through Teheran, with two revolving digital cameras fixed on the dashboard, pointed most of the time inside the car but occasionally turned around to look at the street, but never leaving the confines of the vehicle.

As biting, dark and existential as Kiarostami’s opus was, but disguised under a lightweight almost flippant disposition, the entire film is built around Panahi, who drives the cab himself, mostly listening to his passengers as he crosses Teheran from one end to another. In the process, he offers a priceless cinematic lesson, proving once again that if you know what you want and how to express it, the whole mystical paraphernalia of filmmaking and its inflated budgets is not really necessary.

In a series of apparently unrelated vignettes, Panahi’s customers come in and leave the taxi, arguing about anything from the ease of dispensing capital punishment in Iran to the flourishing black market in illegal videos. Naked greed is revealed at one point and deep human compassion at another; a little girl is introduced as the driver’s niece and shamelessly steals every scene she is in with her sharp wits and even sharper tongue; a conversation about the physiognomy of delinquents leads to the conclusion that they look like everybody else and a set of definitions for correct Islamic filmmaking is dictated by a teacher to the niece for her school assignment. And though this sounds like a parody, it is perfectly authentic and Panahi himself has been condemned for not respecting it.

A civil law lawyer disbarred for her activities goes around with a smile on her face distributing flowers to her former clients; references galore are made to films in general and to Panahi’s films in particular, while he keeps on driving the car, using a finger to push the camera on the dashboard one way or another, just to remind the audience they’re watching a film and there is a director deciding what the camera is supposed to see. Brisk editing could suggest a flimsy approach to each of the many subjects raised, but the script puts them across so adroitly that no target is missed all through.

More than ever before, Panahi’s composite picture of contemporary Iranian reality puts on a satirical shape, but the melancholy smile on the driver’s face – and in this case driver and director are one and the same person – is more eloquent than any piece of dialogue. How this film was made, cut and put together; how it was sneaked out of Teheran and how come the regime there is not blowing a fuse are questions that remain to be answered. The film, however, stands on its own merits. And if you’re wondering about the missing credits, Panahi prefers not to quote any other names beside his own. No need to explain.