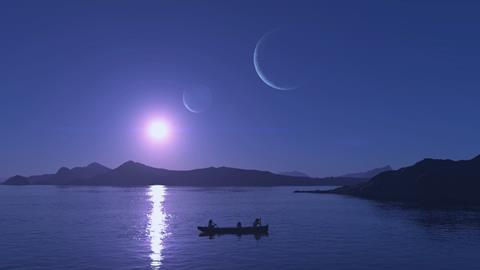 Like Patricio Guzman’s previous documentary, Nostalgia de la Luz, The Pearl Button (El Boton de Nacar) takes a Chilean location as the springboard for an exploration of a cluster of mysteries: some of them, like the Pinochet regime’s desaparecidos, man-made; others cosmic, like the distant galaxies that are monitored from the giant radio telescopes that stand in serried ranks in the Atacama Desert – the setting of Nostalgia.

Guzman’s documentaries are festival pleasers that occasionally nuzzle into arthouse theatrical berths or specialist documentary TV slots. This one will be no exception. It does however deserve to be seen on the big screen.

Though these are glimpsed briefly at the beginning of his new film, it’s a different area of his country that interests Guzman this time round: the vast watery expanse of the Patagonian Archipelago. Applying the same mix of lyrical nature and space imagery, voice-over narration, archive photos and footage and interviews, the director crafts another deeply poetic but also committedly, at times even angrily, humanist meditation on buried traces of the past and how they determine our present and future as a race and as a civil society.

The one criticism that can be made of a documentary that by no means looks out of place in competition in Berlin is that it’s not breaking any new ground for the director. But that’s probably only to be expected in a film that Guzman himself has announced as part of a triptych, with a third documentary on the Andes to follow.

Barely distributed at all in Chile itself, Guzman’s documentaries are festival pleasers that occasionally nuzzle into arthouse theatrical berths or specialist documentary TV slots. This one will be no exception. It does however deserve to be seen on the big screen: certain Patagonian glacier sequences, waterfall shots and macro natural world close-ups, filmed in 2K by talented French cinematographer Katell Djian, are mesmerising.

Over shots of a 3,000-year-old block of quartz that still has a water drop imprisoned in it, Guzman’s own languid, gentle voice-over introduces the Patagonian location and the documentary’s central theme: water. Edited so as to move from the cosmos to recent history and back again, Guzman begins at his most lyrical, setting the Patagonian scene and atmosphere with a mix of ravishing shots of glaciers from the water, meditations on his childhood and crisply-recorded sounds of cracking ice and rain.

Next, we learn about the five native tribes that used to live in this inhospitable land of water, rock and ice – all but exterminated first by European colonists, later by Chilean settlers. Interviews with a historian, a poet, and three of the surviving Fuegian natives fill in the background – most touching are those with an elderly woman, Gabriela, one of the few remaining speakers of Kawesqar, whose family would think nothing of paddling hundreds of miles by canoe.

For Guzman, the Allende and Pinochet years are something of a core interest, but when the inevitable connection finally comes the tone is more elegiac than polemical. It’s a button that bridges the gap between the genocide of the Patagonian natives and the estimated 1,200 to 1,400 political prisoners who were thrown into these icy seas by Chilean navy helicopters. The story involves a Patagonian native called Jemmy Button who was taken back to England in 1830 by the captain of the HMS Beagle, and a section of train rail discovered on the sea bed, which had once been tied to the body of one of the Pinochet regime’s tortured victims.

Far-flung connections like this are beautifully made by Guzman, rather in the style of German writer W.G. Sebald’s books. Tools associated with fiction are used to tell the truth, and an elegant tone is deployed to disguise a righteous fury.