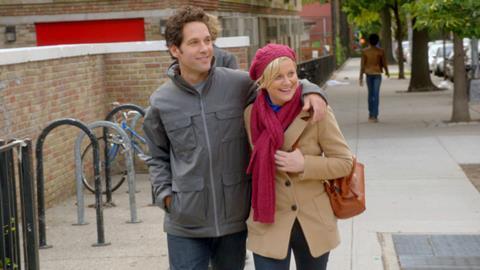 In They Came Together, a charming chocolate shop in New York is almost swallowed up by a greedy candy conglomerate. Romance helps avert that disaster and all sorts of other silly predicaments in this tiresome burlesque of spoofs that is too coyly absurd for its own good.

Poehler and Rudd are game for their parts as neurotic single Manhattanites rocking back and forth to the rhythms of love/hate, but the dialogue isn’t there.

David Wain’s new comedy is slapstick, mostly verbal, as it brings an Airplane zaniness to a love story between a shopowner (Amy Poehler) and a candy executive (Paul Rudd). Yet this stab at screwball vaudeville has all the punch of hammy community theatre. The public for They Came Together won’t go beyond the most stalwart fans of its leads, and audiences outside the English-speaking world may be scratching their heads in bemusement.

In the script by Wain and producer Michael Showalter, Joel (Rudd) is a top manager for Candy Systems & Research. (Casting him in that role is part of the improbability that’s intended to propel Wain’s farce.) The firm in New York is on the corporate warpath. Its target is the intimate Upper Sweet Side, a shop run by Molly (Amy Poehler).  Friends arrange for the two to meet at a Halloween party, but they collide violently on the street– both dressed with bald heads as Ben Franklin – and they arrive angry at the same place, hence the title “they came together” – one of the film’s many excuses for a laugh line.

Almost 90 minutes of what sound and look like unimaginative improvisations are narrated as flashbacks by Rudd and Poehler with another couple at a fancy restaurant (Bill Hader and Ellie Kemper). Wain leads his well-known cast through spoofs of such classics as When Harry Met Sally, Annie Hall, The Graduate and the sharp-elbowed comedies of Tracy and Hepburn. Each gag makes you wish you were watching the original, although a clench between Joel and his grandmother (Lynn Cohen) that almost leads to incestuous coupling deserves credit for sheer audacity. Most of the time, however, the actors on the screen seem to be having much more fun than the audience will.

Real locations in New York look like back-lots here – an unenviable achievement – and adequate production values are at the level of the performances in which nothing is meant to be taken seriously.

If there is a surprise in They Came Together, it is Christopher Meloni, for years an earnest detective in Law & Order on television, who plays the self-important chairman of the candy corporation. Meloni gives the stuffed corporate shirt a crazy verve, reminding you that farces can and should be funny.

Poehler and Rudd, who played camp counselors in Wain’s much more entertaining Wet Hot American Summer (2001) are game for their parts as neurotic single Manhattanites rocking back and forth to the rhythms of love/hate, but the dialogue isn’t there. Even Michael Shannon’s sudden appearance as a crazed violent husband just released from jail can’t save this one.