'The Legend Of Tarzan': Review 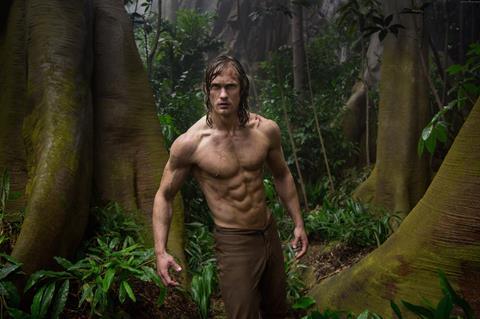 A muddle in the jungle, The Legend Of Tarzan transforms Edgar Rice Burroughs’ iconic character into a cinematic superhero — but certainly not a memorable one. This ungainly and glum tale of the man famously known as Tarzan — who returns to the Congo, reconnecting with his past in the process — slavishly adheres to contemporary blockbuster convention, offering not a single spark of inspiration or real daring. A talented cast led by Alexander Skarsgård scowls through the film, held hostage by a solemn script and ghastly amounts of CG.

The Legend Of Tarzan, which comes to the US on July 1 and the UK on July 6, may well be a theatrical underperformer, hurting Warner Bros’ hopes of establishing a new franchise. Margot Robbie, Samuel L. Jackson and Christoph Waltz add marquee value, and the film’s vague resemblance to hits like the Planet Of The Apes reboots and Peter Jackson’s King Kong remake could help initially. But while the studio will be praying that audiences’ evergreen fondness for Tarzan can overcome potentially poor reviews, word-of-mouth should be modest at best.

Set in the late 19th century, the film picks up the action as the nobleman John Clayton III (Skarsgård) is asked to travel to the Congo to be the British representative overseeing the development of African lands by European nations. John accepts, albeit reluctantly. He has not travelled to the Congo since he grew up there, raised by the apes and given the name Tarzan. Now a contented Earl living in “civilized” society, he has misgivings, but prompted by his spirited wife Jane (Robbie), with whom he fell in love in the Congo, he decides to return with her by his side.

His homecoming is immediately complicated by the fact that his invitation from the King of Belgium is actually a trap coordinated by the king’s envoy, Leon Rom (Waltz), who has arranged to deliver him to an aggrieved local chieftain, Mbonga (Djimon Hounsou), in exchange for a mass of diamonds. Capturing Jane and using her as bait, Leon lures John and his partner George Washington Williams (Jackson) across the jungle to Mbonga, who is looking to avenge a secret old wrong.

Directed by David Yates, who helmed the final four Harry Potter films (which were among the darkest of the series), The Legend Of Tarzan longs to be a sombre, stirring action-adventure, one that balances thrills with cultural commentary. Yates and writers Adam Cozad and Craig Brewer cast a harsh light on colonisation, the despoiling of the environment and the exploitation of others for personal greed. However Tarzan tends to approach these topics the way it handles everything else: with a blunt-force obviousness that comes across as obligatory, as opposed to impassioned.

The film’s special effects can be impressive — the apes were created digitally, the animators working with stunt performers without relying on motion-capture technology — but as is the case with far too many recent blockbusters, Tarzan can’t transcend a general sense of phoniness. No matter how meticulous the CG is rendered, there’s simply so much of it in every scene that it quickly distances the viewer from what they are watching, resulting in an impersonal feat of computer wizardry with almost no emotional resonance. In Tarzan, crocodiles menace the rivers, elephants roam the land and gazelles scurry to and fro — but for a film packed with wildlife, there’s very little sign of actual life in the frame.

Skarsgård has been a brooding presence in films such as The Diary Of A Teenage Girl and on television’s True Blood, but as Tarzan he’s forced to play a gritty hero, one who mistakes a dour expression for dramatic complexity. The actor conveys the character’s quiet, feral core — the smouldering, untamed part of him that hasn’t been domesticated by leaving for London — but he can’t elevate a bland script which only sees Tarzan in noble-savage clichés. (The film is also hamstrung by a tortuously complicated past-and-present structure in which Tarzan’s journey to rescue Jane is often juxtaposed with dreary flashbacks that establish how Tarzan came to be adopted by apes, fell in love with Jane and first crossed paths with Mbonga.)

Along the way, Tarzan tries to sell its protagonist as a superhero with incredible strength and superior survival skills. In the movie, he zips from vine to vine like Spider-Man web-slinging his way through Manhattan, and he clashes with fearsome gorillas in bone-crushing, mano-a-mano battles that wouldn’t feel out of place in a Superman film. Granted, Tarzan has often been depicted as having superpowers of sorts, but Yates fails to find anything dynamic or unique about his protagonist. Even though Tarzan predates the comic-book characters that now dominate the multiplex, his new movie seems to be aping theirs.

The film’s lack of inventiveness extends to a crop of unconvincing performances by good actors. As the fiendish Leon, Waltz relies on his usual bag of sophisticated-villain tricks. Robbie tries to bring some sass to Jane — in a nod to gender equality, she jokes about being the damsel in distress — but it’s a nothing part which leaves her on the film’s sidelines. As for Jackson, his primary job is to portray a complaining hanger-on who can’t keep up with the much more athletic Tarzan as they race across the jungle to find Jane. He and Skarsgård probably share more screen-time than Skarsgård and Robbie — the chemistry between the two couples is comparable, which is to say almost non-existent.

Screenplay: Adam Cozad and Craig Brewer, story by Craig Brewer and Adam Cozad, based on the Tarzan stories created by Edgar Rice Burroughs