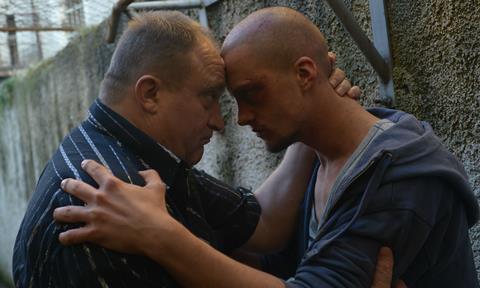 A changing Europe becomes the devil’s playground in Peter Bebjak’s The Line. Set along the Slovakian-Ukrainian border in the months before Slovakia joined the Schengen Zone in 2007, the film follows a tight-knit group of smugglers who make their living purveying contraband goods over that porous crossing, and who realise their racket is about to come to an end once Slovakia is brought under a wholly different iron curtain. All bets are off as alliances dissipate and the prevailing order comes crashing down in this devious, sprawling crime thriller.

Weaving the region’s political and religious culture into a shamelessly genre outing, The Line should have good commercial prospects in many Eastern European markets. Factor in superb production value and a darkly comic tone, and you have the makings of a project that can travel beyond the eastern bloc.

In a certain light, the film is a spiritual cousin to The Sopranos, focusing on crime boss Adam Krajňák’s (Tomáš Maštalír) middle-aged disappointments and family responsibilities as much as it does his criminal exploits. Broad shouldered and weary-eyed, Adam has a kind of stoic nobility, refusing to smuggle drugs or engage in more violence than absolutely necessary. He’s a criminal with a code, and in a society where politician and priest are in on the graft, he’s the only one who is fully true to himself.

The Line pays significant attention to the cohorts, associates and enemies that make up Krajňák’s social circle. His daughter Lucia (Kristína Kanátová) and best friend Jona (Eugen Libezniuk) both get their own unique subplots, and just like that aforementioned HBO series, the film is very much an evocation of a specific milieu. If anything, it feels too cramped, cramming in more side stories, supporting characters, and thematic concerns than a nearly-two-hour feature can handle. It barrels through a series’ worth of plot points like its main characters chain-smoke cigarettes.

Director Bebjak steers the ship with stylish confidence, though the cutting from plot to plot can sometimes muddy what ought to be a clearer narrative through-line. Independent scenes sizzle onscreen, but the film is at its absolute best when it wrangles all the disparate elements into the same scene. Luckily, Peter Balko’s screenplay finds many occasions to do just that, relying on that stalwart gangster-movie trope of using a wedding or funeral to bring everyone together.

Bebjak shoots many of these sequences in long, unbroken takes, often with multiple planes of actions within the same frame. In one of the film’s standout scenes, Adam and Jona quietly conspire in the foreground, while Lucia stands in her wedding gown singing behind them and far in the background drunken revellers whoop and dance to her song.

Technical specs are highly polished. Slavo Solovic’s folksy score keeps the action moving and goes a long way to tie a number of intercut sequences together, and the film is very much a showcase for DP Martin Žiaran’s glossy visuals and fluid camerawork. Should The Line do well internationally, expect producers to google his name.