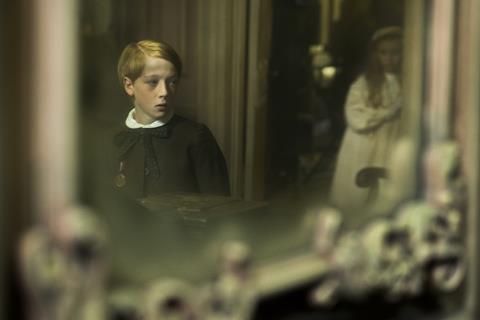 Despite current waves of Brexit-y nostalgia, post-war Britain was indeed a harsh world to inhabit; rationing, widespread poverty, and, in The Little Stranger, a threadbare landed gentry hanging on to the social pecking order in a decaying large house deserted by domestic help. Downton be damned: even though a local village boy like Dr Faraday (Domhall Gleeson) can rise rapidly through the ranks to become doctor to the family who cling to The Hundreds, he can never break free of his chains.

The Little Stranger is a deliberately crafted mystery. There’s a hole flowing through the novel which the writer Sarah Waters required the reader to fill with the full chill of their imagination. Lenny Abrahamson’s sumptuous adaption has left it there for the viewer to trip over: is this a character drama with a wilfully oblique lead character? A ghost story about a dead child, but without a ghost? Abrahamson assembles all the ingredients for Turn Of The Screw suspense but never quite twists them with the dread that needs to seep through the halls of the central stately home.

The success of The Handmaiden, the last Sarah Waters novel to be adapted – or transformed – by Park Chan-wook, will add lustre to this project, coupled with Lenny Abrahamson’s cachet from The Room. Viewers hoping for a Woman In Black will be met with the fixed stare of Dr Faraday, however played with an unappealing rigidity by Domhnall Gleeson. Even Ruth Wilson, at her stripped-down finest, Charlotte Rampling, or Will Poulter in a nice supporting role, can’t quite breathe enough life into these perfect period trappings or Gleeson’s set jaw.

On release in the UK from September 21 and the US a month earlier, Abrahamson’s film is set in 1948, when Dr Faraday returns home after the death of his mother to join a local practice being set up at the onset of the NHS. He soon finds himself called to attend a young maid called Betty (Liv Hill), the only “help” at Hundreds Hall, which he hasn’t seen since he was a child on Empire Day in 1919. Gone to ruin, it is being ineptly run by the physically-disfigured and PTSD-impaired Roderick (Poulter) together with his sister Caroline (Wilson). Graceful matriarch Mrs Ayres (Charlotte Rampling) keeps a sad, if imperious, eye on what is left of her family.

The story is largely related from Dr Faraday’s point of view, without the first-person narrative of the book. This has the unfortunate effect of taking away what little personality Gleeson had to work with, and the young actor’s face hasn’t quite achieved the character to cover the cracks playing this deeply repressed, socially-constrained, completely unreliable narrator. The death of the Ayres’ daughter on that fateful Empire Day reverberates through the house as the family desperately tries to keep things together, and the combined strain results in physical manifestations that may be real or imagined.

While the film doesn’t quite work as a horror, and can stumble as a character piece, Abrahamson has pulled together a sumptuous production which is more than sufficient to keep viewers engaged throughout. A poverty-stricken post-war Britain, with its disintegrating social classes and genteel make-do-and-mend sensibilities, comes to full three-dimensional life here, and the realisation of The Hundreds and its frayingly genteel inhabitants is fully fleshed-out. Abrahamson and his team avoid the traps of the stately home period piece, giving the picture a drained, yet still colourful appeal.

Screenplay: Lucinda Coxon, adapted from the novel by Sarah Waters