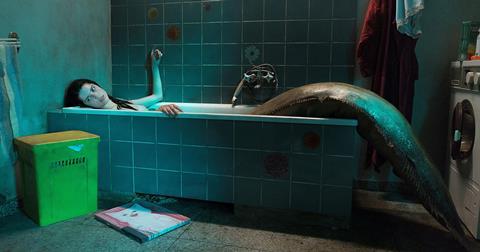 A vampire mermaid musical, this Polish first feature seduces with a siren’s call of impressive special effects and a stylishly sleazy vibe. The considerable appeal of the two central characters, a pair of minxy teenage mermaid sisters with a taste for human men, plus the originality of the premise, should ensure that this striking debut proves to be a buoyant presence on the festival circuit.

Out of water, the sisters sprout human legs, returning to fishy form when they get wet

But if, ultimately, the film fails to reel in its audience, it is due to puddle-deep characterisation and a plotline which slows to a trickle by the third act, making the choppier waters of a theatrical journey might be harder to negotiate. However, the film’s forthright approach to piscine-human sexual encounters will be a selling point to some audiences.

The two aquatic sisters, Silver (Marta Mazurek) and Golden (Michalina Olszanska), are inadvertently summoned from the deep by Mietek (Jakub Gierszal), the beautiful blond bass player in a cheesy nightclub house band. He strums his guitar and croons on the beach, while his bandmates drunkenly sing along. And the girls sing back to him, a beguiling seduction and a promise that “we won’t eat you, dear.” The spell is broken when Krysia (Kinga Preis), the band’s singer and keyboardist spots the fact that her bassist and drummer are about end up as a sub-aqua snack.

We don’t get to eavesdrop on when happens next, but it seems that Golden and Silver have formidable persuasive powers. While the band, Figs and Dates, cover Donna Summer’s I Feel Love in a neon-drenched 1980s nightclub, the girls frolic backstage in the dressing room. They are only too willing to demonstrate their USP – out of water, the sisters sprout human legs, returning to fishy form when they get wet – to the lecherous owner of the club (Zygmunt Malanowicz). However, they don’t reveal the piranha teeth that grow when mermaids prepare to feast on human flesh.

The club owner can spot star quality, even when it is partially covered in scales, and signs the girls up as backing singers and strippers. Although they speak Polish (learned on the beach in Bulgaria, says Golden with a smirk), the sisters communicate telepathically with dolphin clicks and squeaks. They agree to hang out in Warsaw for a while before swimming to America. “What if you fall in love?” cautions Golden, who has seen the way her sister looks at Mietek. “Would you eat him?”

Celebrity, accompanied by sparky but unmemorable Europop song-and-dance routines, is almost instantaneous. But while Silver decides to take the plunge and become fully human to win the heart of Mietek, Golden finds it hard to suppress her true nature, occasionally chowing down on members of her fanbase.

The design is arresting: a saturated colour palette of greens and blues evokes the undersea world that the girls left behind, while the spangly glitterball aesthetic of the club accentuates the artifice of their new life. The early potency of this macabre fairytale becomes increasingly diluted however, as the film progresses and the story broadens to include a whole subculture of mythical sea creatures who have chosen to slum it in Warsaw’s music industry of the mid-1980s.