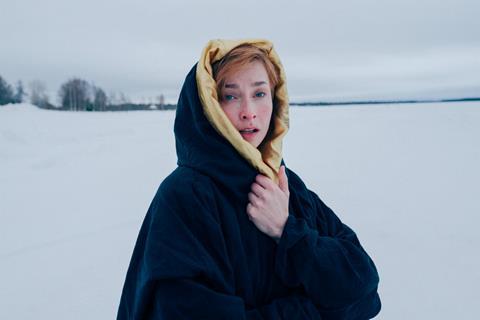 The Magic Life Of V

An intimate and affecting account of overcoming trauma, The Magic Life of V steps into the realm of live action role-playing, or LARPing, where participants play fictional characters in organised events conducted in real-world settings. Focusing on Finnish 25-year-old Veera Lapinkoski, and handling its subject with a depth of feeling and intelligence, Tonislav Hristov’s (The Good Postman) observational documentary ponders the parts that people inhabit to face their ordinary lives — not only overtly, but also when navigating everyday minutiae.

With Veera’s face providing The Magic Life of V’s main visual focal point, even the smallest of changes tell a revelatory tale

Primed for a modest festival run and, crucially, remaining accessible to audiences previously unfamiliar with Veera’s chosen pastime, Hristov’s second Sundance world cinema documentary contender in as many films is a study in contrasts. Acknowledging the importance of fantasy as a coping mechanism, the movie juxtaposes the solace that its central figure finds in her beloved hobby — where she adopts a self-assured alter ego named V — with the deep-seated pain that she’s trying to escape.

Quiet, uncertain and more comfortable in character than being herself, when Veera first talks about V, she rattles off a list of traits. Her invented guise is talkative, happy, friendly, well-liked and helpful — characteristics that Veera clearly wishes that she possessed in reality. It isn’t until towards the end of the documentary that she explains her existential dilemma to a fellow LARPer, although it proves evident in every word spoken beforehand. Veera wants to simply enjoy the pretense, rather than feel like she needs to become V to survive.

Specifically, Veera wishes to regain control over her life, emotions and memories, the reasons for which Hristov fills in gradually. The more details that The Magic Life of V reveals about Veera’s past, the more that her fondness for LARPing strikes a relatable, understandable chord. She cares for her older brother, Ville, who has suffered from brain damage since infancy, endured bullying as a child and experienced violence at the hands of their estranged, heavy-drinking father. Also a victim, Veera struggles visibly with the imprint left by the man she hasn’t seen in 15 years.

Hristov takes viewers inside two LARPs: a Harry Potter-style event in Poland, complete with cloak-wearing students sorted into houses, and a dystopian monster-invasion scenario in Bulgaria. Editing alongside Anne Jünemann, the writer/director flits between role-playing, normality, grainy home video footage from Veera and Ville’s childhood, and an unflinchingly honest therapy session. But whether he’s chronicling Veera’s daily routine, watching her play her favourite part or hearing her unguarded thoughts, his film gazes attentively at her, scrutinising every expression.

Indeed, cinematographer Alexander Stanishev makes the act of staring intently feel like second nature — with Veera’s face providing The Magic Life of V’s main visual focal point, even the smallest of changes tell a revelatory tale. That proves especially true as she endeavours to reconcile her invented self with her actual self, using the former to help the latter tackle her real-world problems. The end result is an experiential, empathetic film, steeping the audience firmly in Veera’s mindset but never wallowing in her troubles.