​'The Man Who Bought the Moon': Busan Review 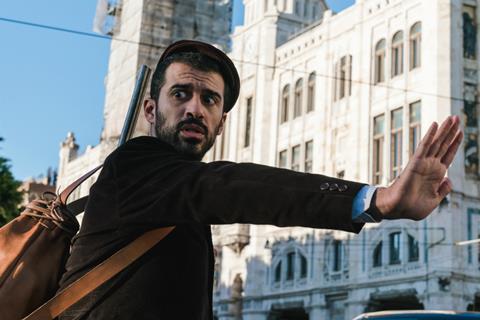 The Man Who Bought The Moon

Like the celestial body that gives the film its name, The Man Who Bought the Moon cycles through several phases — and while some shine, others offer barely a sliver of brightness. There’s much that’s instantly farcical about the movie’s titular concept so when The Referee director Paolo Zucca leans into the idea, his second feature has an undeniable absurdist glow about it. When the filmmaker focuses on culture-clash comedy, however, his Busan-premiering feature remains broad, slight and forgettable.

When Zucca flexes his fondness for exaggeration, The Man Who Bought the Moon boasts an almost tidal pull

Indeed, a late stint of enjoyable silliness won’t be enough to prolong The Man Who Bought the Moon’s orbit on the festival circuit, though Italian-focused programmers might take note. Co-writing the screenplay with I Am Love’s Barbara Alberti and The Referee actress-turned-scribe Geppi Cucciari, Zucca retains a clear sense of humour throughout, although the film suffers from thinness and familiarity for the bulk of its duration. Remove the earth’s only satellite from the story, and all that’s really left are jokes about the chasm between mainland Italians and Sardinians; caricatures so creaky and familiar that they could be used in any us-versus-them scenario.

When word spreads that the moon has been claimed by an unknown Sardianian, phones start ringing around the globe, but Italian intelligence’s finest (Stefano Fresi and Francesco Pannofino) are immediately on the case. Alas, dispatching a soldier across the Tyrrhenian Sea to get to the bottom of the matter isn’t as easy as it sounds. First, the duo has to find a skilled operative with Sardinian ancestry who can blend in with the locals. And, when bottle-blonde paratrooper Kevin Pirelli (Jacopo Cullin) is located and blackmailed into taking the job, he still has to be taught the minutiae of the island’s customs and mannerisms, under the instruction of an expat known simply as Badore (Benito Urgu).

As Kevin and Badore work together across The Man Who Bought the Moon’s first half, repetition sets in quickly in scenes that stretch one-note gags beyond breaking point. As such, the eventual rapport that springs between the two men flows from easy yet engaging performances from Zucca’s two The Referee alumni, rather than the movie’s underlying material. Once the newly dark-haired Kevin arrives in Sardinia, discovers that the stereotypes don’t initially fit and looks like an obvious fish out of water, the same proves accurate. That the undercover soldier evokes any empathy or interest is all a product of Cullin’s comic yet never completely over-the-top portrayal.

And yet, when Zucca flexes his fondness for exaggeration elsewhere, The Man Who Bought the Moon boasts an almost tidal pull. An outlandish finale comes complete with lunar dream sequences and rampaging armies, and battles with Diamantino for some of the year’s most memorably ridiculous big-screen moments. When the film finds its eponymous man (Lazar Ristovski) and lays bare the reasons for his purchase, it also succeeds in a completely different mode: moving and even understated. Sadly, this welcome trip into nuanced territory arrives much too late and is over much too swiftly.

The end result may still struggle to leave an imprint, let alone a moon-sized crater, but it’s a technically polished affair. Visually, Zucca and his cinematographer Ramiro Civita fill the screen with a number of arresting images, surveying the Sardinian landscape and brandishing the warm, sunny colours that the film apes in its upbeat mood. And even when The Man Who Bought the Moon’s story drags, the movie still feels snappily-enough paced in editor Sarah McTeigue’s hands.