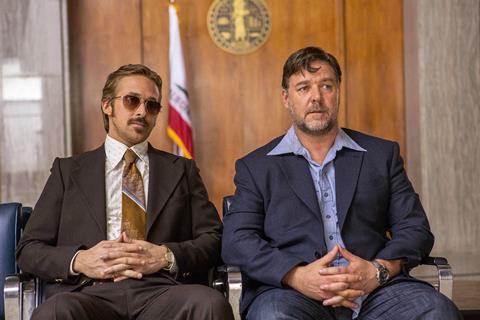 The last time he directed, action screenwriter extraordinaire Shane Black hit paydirt – 2013’s Iron Man 3 scored both commercially (with a worldwide gross of over $1.2bn) and artistically, a superhero movie with a genuine auteur stamp. Black’s previous directing venture, however, didn’t set the world on fire: comedy thriller Kiss Kiss Bang Bang (2005), starring Robert Downey Jr three years before his Tony Stark role made him a box-office deity. Black should do better with spoofy neo-noir exercise The Nice Guys, if only because of the cast-iron pairing of Russell Crowe and Ryan Gosling. Even so, this affable retro number lacks the zing of both aforementioned films, and it’s left to the leads – aided by terrific young find Angourie Rice – to keep the film afloat with self-mocking charm.

There’s a distinctly self-referential film-buff dimension at work, but it’s nowhere near as charming as in Kiss Kiss, Bang Bang.

There’s a distinctly self-referential film-buff dimension at work, but it’s nowhere near as charming as in Kiss Kiss, Bang Bang. The Nice Guys harks back to the 70s golden age of revisionist detective thrillers, but the result feels too knowingly déja vu, rather than bringing a truly fresh angle.

On the mystery front, the plot never feels satisfyingly complex or surprising: we can guess exactly where things are headed the moment a glacially inexpressive Kim Basinger rolls into view as a woman of power. But while their one-liners could be a lot sharper, Crowe and Gosling more than get by on stumblebum amiability. Plus there’s classy support, including an all-guns-blazing Beau Knapp as a giggling heavy, while Rice brings character and verve to her ingénue role. And, though the wham-bam sequences sometimes feel a touch messy, aficionados of that once plentiful action staple, flying glass, won’t feel short-changed. Still, while the ending sets up a sequel, you ultimately feel that once is nice enough.