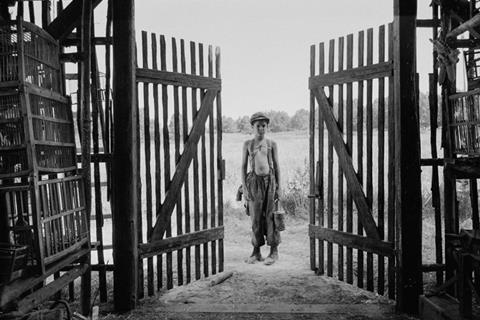 War is brutal, and so, despite its good intentions, is The Painted Bird, a film based on Jerzy Kosinski’s controversial book about a young Jewish boy who wanders through a rural Eastern Europe that has been ravaged and dehumanized by the horrors of World War II. There is beauty in the 35mm black and white landscapes and framings of this painterly widescreen feature, but it stands in stark contrast with the alienating narrative and tone of a film which, like Kosinski’s book, takes a strange relish in charting the descent of simple country folk of a never-named country into sexual depravity and joyless cruelty.

Disturbing for all the wrong reasons

Published in English in 1965, The Painted Bird was initially passed off as autobiographical but was later revealed to be a fictional construct that was partly plagiarized from the work of other Polish writers. Marhoul, a producer-director whose last film, Tobruk (2008), also set during the Second World War, followed two Czech soldiers fighting with the Allies in North Africa, has said that he only cares about the book’s ‘truthfulness’, rather than its biographical truth. Yet, for the film’s audience, this is exactly the problem. Mild applause at the end of the film’s Venice competition press screening suggested that some were won over by this almost three-hour survival saga, but that may not be enough to secure much theatrical buzz for what is, after all, a tough-watch Eastern European drama shot in black and white.

It’s a matter of historical record that atrocities were committed by both sides on the Eastern front; that many civilians in Poland, Ukraine, Russia and elsewhere remained deeply anti-semitic; that as the conflict swirled about them, moral standards were lowered and a few people did things they would regret or try not to think about in peacetime. But the fraud at the heart of Kosinksi’s book, still present in this adaptation for all the script’s sympathy with its displaced minor hero (known only as The Boy), doesn’t really have much to do with whether this was all really witnessed by the author.

What is far more troubling is the fact that a tragedy of humanity is used simply as board on which to pin one man’s banal, pornographic, Hieronymus-Bosch-for-Dummies vision of what goes down when our basest instincts take over – one that, for good measure, paints a mostly degrading, male-gaze picture of women and finds kindness only in male priests and soldiers. Indeed, most of those in the room at Venice had been lost around a third of the way in, when a jealous miller played by Udo Kier uses a spoon to gouge out the eyes of a mill worker he believes has designs on his wife, and the cat takes an interest in the eyeballs lying on the floor. If that provoked a spate of walkouts, so did a later scene in which a sylvan nymphomaniac is lynched, horrifically, by a group of village women.

In a film such as Pasolini’s Salò, or the 120 Days of Sodom, a vision of wartime depravity and horror is fuelled by politically motivated anger – and it’s still a deeply disturbing, questionable exercise. The horrors on display in Marhoul’s film (which include child abuse) are tame in comparison with Pasolini’s near unwatchable 1975 classic, but they also feel somehow more gratuitous as, in what is after all a dramatic film rather than a documentary, we struggle to grasp the point of them.

Is it to desensitize the audience so that we too share the journey of The Boy towards a kind of unfeeling emotional numbness? If so, the strategy backfires, as it means we also withdraw sympathy from the film, the director and, to an extent, even his protagonist, whose innocent Everyman pilgrimage is the film’s human core. There’s a casting issue here too: first-time actor Petr Kotlar gives his all as The Boy, but he’s too much of a blank canvas, an angelic presence who goes through hell but is changed more on paper than on the screen.

Ravishingly shot in black and white Cinemascope, The Painted Bird is full of quiet passages in which The Boy wanders through forests, snowscapes and water meadows, the peace and silence of nature contrasting with the horrors that we soon learn to brace for around every bucolic corner. The pilgrimage of this young, serious, dark-eyed Jewish lad begins when the aunt he has been sent to live with dies and her farmhouse burns down.

In a series of chapters marked by onscreen titles bearing the name of the characters The Boy meets along the way, he is used, abused or helped by, among others, a village sorceress and faith healer, a kindly bird trapper (Lech Dyblik), a good-hearted German solider (Stellan Skarsgaard) who spares him from execution, a well-meaning Catholic priest (Harvey Keitel) who however turns out to be a terrible judge of character when he sends him to live with a sinister farmer played by Julian Sands. Later, he’s adopted by a Russian division and taken under the wing of a sniper played by Barry Pepper (putting to good use the same army skillset he had learned in Saving Private Ryan).

German and Russian soldiers apart, the scant dialogue is mostly in a Pan-Slavic pidgin or ‘Esperanto’ invented especially for the film – perhaps in order to avoid ascribing the common people’s bad behavior to any one territory. There is some closure at the end, some attempt to link The Boy’s saga with a Holocaust which has been a constant, understated theme throughout, and there’s insight and empathy in the way The Painted Bird shows the hero’s Jewishness as a problem of how others see him, not one of self-definition. But the closure comes too late in a film that is disturbing for all the wrong reasons.

Screenplay: Václav Marhoul, based on the book by Jerzy Kozinski