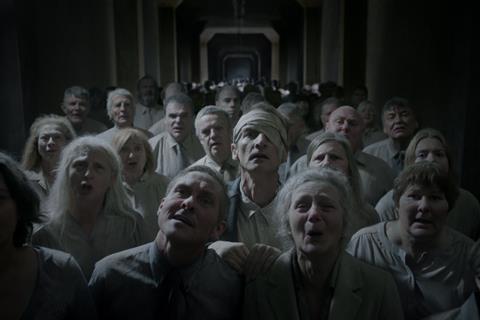 A striking first feature steeped in allegory, dust and despair, The Penultimate brings a blend of absurdity and theatricality to a stylised tale of humanity unravelling. A humble water inspector (Joen Højerslev) arrives at a vast concrete building to read the meter, but soon finds that he is unable to leave. The building, with its gaping concrete corridors, featureless cell-like rooms and deranged residents, represents a kind of psychological maze. As the man becomes increasingly desperate, he loses sight of the person he was when he first entered. Eventually, more animal than human, all he can hope for is the sweet release of death. Some audience members may relate. Others will embrace the nightmarish grotesque quality of Jonas Kærup Hjort’s singular vision.

The film’s unconventional tone, which exists in an underpopulated hinterland located somewhere between philosophy, horror and immersive theatre/art installation, means that it may require careful positioning in further festival slots following its premiere in Tallinn. The film’s considerable visual impact means that it will likely play best in physical events, on the biggest screen available The fact that two hours feels like a punishingly long time to be trapped within these oppressive concrete walls doesn’t make this an easy watch, but perhaps a tighter edit might result in a more accessible product.

Hjort, a recent graduate from film school with a background in theatre, clearly has a strongly visual sense when it comes to storytelling. The film’s opening shot, of a man and a plodding donkey, kept in the centre of a boxy frame, is a thing of stark beauty. Likewise the framing within the building. Hjort makes a prison out of the symmetry of each shot, even before the water inspector realises that he can’t leave.

The man soon encounters a pair of adult male identical twins (Anders Plougman, Niels Plougman). From this point onwards, they follow him around. Initially, they are rather sinister, with their impassive gazes and creepy co-ordination. As the film progresses however, and the man unravels, they begin to seem more benign, almost reassuring in their consistent, silently lurking presence.

Other characters are less comfortable. The inspector is repeatedly assaulted by ‘The Tormented’ (Malene Melsen), a woman whose jealousy over the man’s non-existent relationship with someone else manifests itself by inflicting numerous head injuries. His wounds are bound in grubby, fraying bandages which eventually cover most of his face. Then there’s The Accountant (Joen Bille), a man tortured by a financial anomaly incurred during the organisation of an event. The man finds himself tied into an agreement to assist The Accountant with his suicide. The Bride (Anne Fletting) claims to know The Caretaker, who reportedly has a key for the door to the world outside. But in order to secure an introduction to The Caretaker, the man must agree to marry her. All of the characters are clad in mildew-grey clothes, and sport the kind of unearthly pallor which is most commonly seen in the films of Roy Andersson.

The Andersson parallels run deeper than the unhealthy complexions of the cast and the film’s putty and cement colour palette. The framing, the use of long takes, the sense of a creeping rot both in the characters and the broader society that they inhabit: it’s all reminiscent of Andersson’s glum nihilism. But while films like Songs From The Second Floor match this film for bleak existential dread and tragicomic gloom, the vignette structure of the former offers the audience a much-needed respite which is not present in The Penultimate and which makes it a more challenging viewing experience on every level.