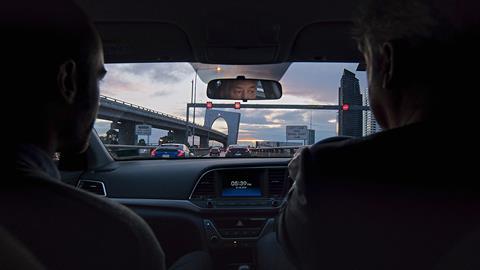 The humdrum becomes slowly and cumulatively fascinating across the three hours of Australian David Easteal’s quietly radical feature-length debut The Plains. A fictional film with significant documentary elements — the vast bulk of which simply observes a middle-aged Melbourne lawyer’s daily homeward commute from the back seat of his Hyundai — it’s another example of the docu/fiction hybrids that have proved festival favourites in the last decade, and ranks among the most accomplished.

It’s all but a one-man show, with Easteal directing, producing, acting, writing, editing and providing the production design

Clearly far from an easy commercial sell, this offbeat, empathetic portrait of an uxorious, genial chap and marriage — his wife of several decades is frequently mentioned but only fleetingly seen — is all but a one-man show, with Easteal directing, producing, acting, writing, editing and providing the production design. Like last year’s Australian indie which competed at Rotterdam, James Vaughan’s Friends and Strangers, The Plains can also look forward to a respectable career on the festival circuit, where the duration of this low-key but richly-detailed character-study will probably prove more boost than bar to such exposure.

The Plains here are semi-arable flatlands adjoining protagonist Andrew Rakowski’s country house in Horsham, situated between Melbourne and Adelaide (the latter city where his aged mother resides in a nursing home). Short glimpses of this area, at times filmed by Rakowski or his wife Cheri, at others via drone shots, punctuate the much lengthier commuting sequences which condense a year into eleven rides — five of them shared with his colleague David. This David is played by David Easteal himself, whose career combines filmmaking with work as a barrister, and who was formerly Rakowski’s colleague at a legal centre in the Melbourne suburbs.

Easteal (previously responsible for a small handful of shorts between 2007 and 2015) has stated that he took inspiration from the duo’s real-life rides to craft a structure and a script — not that this background would be evident to audiences coming into the film without prior knowledge of how it was made, so convincing does it play as straight documentary.

Despite the originality of his concept and approach, Easteal is of course not the first director to attempt in-car cinema. Steven Knight memorably confined Tom Hardy’s harassed anti-hero to a BMW X5 for nearly the whole of tense psychological drama Locke (2013). Prominent arthouse precedents include Abbas Kiarostami’s Ten (2002) and Jafar Panahi’s homage to his compatriot, Taxi (2015), while avant-garde eminences James Benning and Bette Gordon previously captured an entire transcontinental road-trip via back-seat footage in The United States of America (1975).

In The Plains, however, the irony is that while Rakowski’s car is usually in motion (when not frustrated by congestion and blockages) the driver, edging inexorably towards retirement, is painfully aware that he’s not really getting anywhere: this is a “road movie” in name only. Plagued with major and minor problems in his professional and personal life — his ailing 95-year-old mother is one of several significant unseen characters here — Rakowski eventually rails against the repetitive, soul-crushing routines which his daily commute epitomises. “At the end of the day, what’s the point?,” he grumbles, “Life just becomes a grind of waking up, going to work, coming home. It’s like the hamster-wheel…”

Among several slyly effective editing choices — in a film which boasts just 15 cuts — Easteal never actually shows Rakowski completing his commute. He is, in Ursula K Le Guin’s phrase, ‘always coming home’; all arrivals (and reunions with his beloved spouse) are kept offscreen. Several of the 15 cuts are unexpected and jarring, as when Easteal disorientingly interpolates drone footage just after the half-hour mark. The device zooms over unpopulated landscape, the horizon-line tilting crazily as the unseen Rakowski toys breathily with the controls.

The structure of The Plains is playful and idiosyncratic, rather than formalist or rigid. In eight of the 11 commutes (which unfold over visibly different seasons), Easteal begins exactly the same way, filming from inside the empty car before Rakowski shows up and gets inside. But in the other three, the transition goes straight from one drive to the middle of another. The viewer is thus kept nicely unbalanced, a process further aided by those sudden rural interpolations (all such segues are smoothed by crossfading in Nick Batterham’s sound-design).

The unpredictability is also increased by the varying durations of the commuting sequences, two of which run more than half an hour. Just as the film deliberately evokes the grindingly repetitive nature of commuting in terms of its structure, so does it consciously risk longueurs in terms of content. But boredom is thankfully kept at bay. As Rakowski and Easteal chew the fat, the older man occasionally prying nosily into the younger’s personal and romantic doings, droll touches of salty Australian humour pepper their dialogue. The colourful minutiae of personal and family history scattered throughout Rakowski’s myriad Locke-style car phone chats likewise help the hours pass painlessly, even pleasurably.