The Princess And The Frog 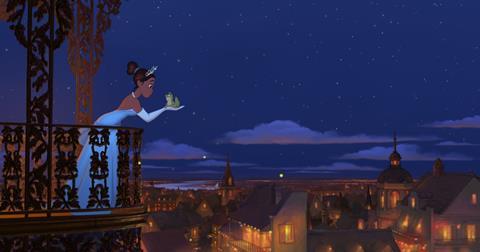 Walt Disney Animation Studios (WDAS) returns to the 2D animated musical form for the first time under new creative chief John Lasseter with The Princess And The Frog, a pleasurable family diversion that plays on the perennial popularity of the princess. Not as magical or memorable as Beauty And The Beast, the 1991 touchstone by which all 2D animated movies are now measured, the film is nevertheless colourful, funny and imaginative and should be a favourite with younger children in theatres and on DVD.

Princess restores some luster to Disney’s inhouse animated output after a decade of mediocrity.

Directed by Clements and Musker, the Disney veterans behind Aladdin and The Little Mermaid, The Princess And The Frog is loosely based on both the Brothers Grimm’s The Frog Prince and ED Baker’s 2002 novel The Frog Princess, although the directors are among four writers credited with an original story. The setting is 1920s New Orleans with all the jazz, voodoo and gumbo soup that suggests and the heroine, for the first time, is African American – a factor which can only help with publicity.

Princess’ wide US release date is set for Dec 11 (after the traditional 2D two-week platform in New York and LA) and Disney International is also opening in several major territories in time for Christmas including Germany, Italy, Mexico and Brazil. The film rolls out around the rest of the globe in January and February to time with school breaks. It should certainly perform along the lines of last year’s Bolt ($114m domestic, $194m international) if not better.

The feisty heroine here – along the lines of Ariel or Belle – is Tiana (voiced by Anika Noni Rose), a hardworking girl who loves cooking and dreams of setting up her own restaurant to fulfill the ambitions of her late father (Terrence Howard). Her friends and her mother (Oprah Winfrey) lament the fact that she never has time for fun or romance, but Tiana is determined to succeed even when her hopes are repeatedly dashed.

Her life changes, however, when handsome, jazz-obsessed Prince Naveen (Bruno Campos) arrives from far off Maldonia. The careless but likeable Naveen attracts the unwanted attentions of shady voodoo practitioner Dr Facilier (Keith David) who transforms him into a frog in an effort to steal his royal privileges. When the frog prince comes across Tiana and persuades her to kiss him on the assumption that a kiss will return him to human form, she too is transformed into a frog.

The two frogs find themselves on the run from Facilier in the Louisiana bayou where they befriend a lovesick Cajun firefly called Ray (Jim Cummings) and a trumpet-playing alligator called Louis (Michael Leon Wooley) and go on a search for a mysterious old priestess called Mama Odie who could turn them both back into humans.

The film-makers enlisted Pixar stalwart Randy Newman to compose the score and seven new songs which tap into the New Orleans jazz sound, and the southern flavour brings a colourful dimension to the fairy tale - not to mention the bayou sequences which serve as a ravishing reminder of the aesthetic power of hand-drawn animation. Indeed, this Princess restores some luster to Disney’s inhouse animated output after a decade of mediocrity.