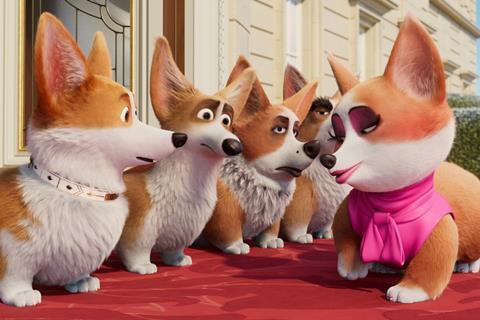 On paper, The Queen’s Corgi seems to have all the elements designed to appeal to young viewers; colourful animation, a cast of suitably cute canines, a simple shaggy dog story and a stunning London location. Yet this tale of a spoiled Buckingham Palace corgi who finds himself kicked out onto the streets and forced to slum it in a local pound is drawn in broad-stroke cliche, with plenty of tasteless moments that are often wildly inappropriate for its intended audience.

Having already opened across multiple global territories, and performing particularly well in France, The Queen’s Corgi (which, despite its inherent Britishness, is produced by Belgian outfit Belga Productions) lands in UK cinemas on July 5, via Lionsgate. With the hugely successful Pixar animation Toy Story 4 still going strong, and summer behemoths like Sony’s Spiderman: Far From Home (which opens in the UK on July 2) and Disney’s Aladdin tempting family audiences, it’s difficult to see how The Queen’s Corgi will make any kind of impact.

In an opening montage, we see how fluffy puppy Rex (voiced in the UK version by Jack Whitehall) becomes the Queen’s favourite pet, to the consternation of her other corgis; most notably the ambitious Charlie (Matt Lucas). When Rex is crowned ‘Top Dog’ — a coveted right of passage which involves a ridiculously elaborate ceremony and a gold collar — Charlie plots to oust Rex. Finding himself on the streets, and then in a pound populated by a variety of unfortunate specimens including the scrappy Jack (Iain McKee) and the bullish Rottweiler Tyson (Ray Winstone), Rex is forced to fend for himself for the first time in his life.

The stellar voice cast do their best to breathe life into this tired material, although Whitehall is missing much of the energetic spark he displays in his stand-up comedy career. And while the animation is of the sharp-edged, angular kind — there are no Pixar levels of depth and detail here, perhaps because there is also a 3D version — that would not have been such a glaring issue if the story had been engaging enough to draw a viewer in.

Instead, the screenplay by Rob Sprackling and Johnny Smith (Sherlock Gnomes, Shaun The Sheep) sets out its stall early on, with a state visit from Donald and Melania Trump (Jon Culshaw and Debra Stephenson respectively). They bring with them their make-up laden, oversexed dog Mitzy (Sarah Hadland), whose over-zealous attraction to Rex moves rapidly from cringe-worthy to desperately uncomfortable, and kick-starts this whole series of unfortunate events.

If it’s ill-advised to attempt to use the Western world’s most divisive figure and his sexually aggressive dog as an object for kids comedy — and adults will note that poking fun at Trump’s obsessions with selfies and fast food make him seem like a laughable buffoon, rather than a dangerous zealot — then there’s worse to come.

The writers have foisted all the usual cliches on this canine caper; female dogs are defined by their sexuality, considered prizes to be won, while male dogs are encouraged to be ‘tough’ and fight out their differences. There’s a particularly nasty joke involving a bearded, pink-wearing “queen” — a gay man who comes to adopt a dog. And particularly obscene is a strand involving the domestic violence between Tyson and his pretty, long-eared spaniel girlfriend Wanda (Sheridan Smith), with whom Rex falls in love and, of course, finds the courage to save.

That much of this so-called adult humour will go over the heads of young audiences is not the point; such writing has no place in modern cinema, not least in a film designed to capture the attention of children. Make no bones about it; this Queen’s Corgi is a dog’s dinner.