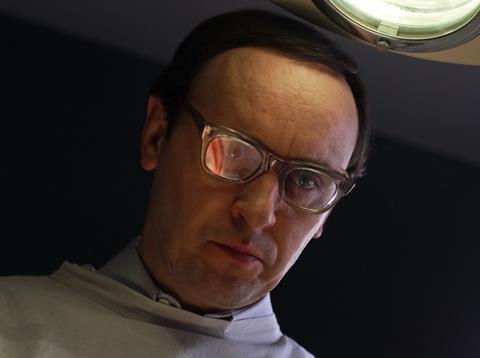 Marcin Koszalka’s first fiction film is a meticulously-shot and atmospheric reconstruction of 1967 Krakow, inspired by the real stories of two serial killers who terrorised the city during that time. Undoubtedly a painstaking labour of love, it requires just as much dedication from the viewer to bridge the cryptic ellipses of Kosalka”s own script. Offering only the very high tips of an iceberg that is left mostly submerged from the naked eye, The Red Spider is strictly art house fare.

Everything in this film can be explained, construed and understood, but clearly that was not the intention behind the script

The plot mostly follows Karol (Filip Plawiak) a young student who is the star of his school’s diving team. After a successful competition, he walks around an amusement park, goes into a dark corner to relieve himself and stumbles upon the corpse of a young boy. As he turns around, he sees someone wearing a beret and holding a briefcase, but instead of alerting the police, he follows the man (Adam Woronowicz), finds out his name is Lutek, and that he is a veterinarian.

By the time Karol approaches Lutek under false pretences, it seems clear that they both know, as does the audience, that Lutek is the Red Spider, the heinous serial killer responsible for a string of murders in Krakow. The vet certainly doesn’t attempt to deny anything, answering Karol’s questions without any visible hesitation. Once again, though, the student doesn’t call the police. Instead, a bizarre relationship is established between the two, close enough for Karol to have dinner with Lutek and his wife and find out the couple couldn’t have children.  At the same time, Karol starts to date a female photographer.

Without unveiling any more details, Koszalka is correct when he claims this is neither a thriller nor a crime movie. The narrative never pretends to generate tension, nor even to tell an realistic story. If anything, The Red Spider is more like a series of reflections on such themes as man courting death, whether by causing it or submitting to it, youthful angst and a desire to dare and do something extraordinary, even if if it’s through a third person. The film also reflects the mood and the look of 1960s Poland, with occational political commentary. Koszalka’s redoubtable camerawork (he acts as his own cinematographer) often suggests a feeling of vertigo and chilly sexual relations are clearly discernible on several occasions.

To be fair, everything in this film can be explained, construed and understood, but clearly that was not the intention behind the script. There is no clear evidence, for example, to persuade Karol that Lutek is the Red Spider, although his prompt confession solves that problem. The relationship between the two is left for the viewer to figure out, their emotional processes hidden beneath the minimalist expressions on the faces of the two actors, perhaps a result of Koszalka’s record as a documentary filmmaker with no previous experience in directing actors. Another reason could possibly be that he specifically asked for this kind of performance, just to put his audience to the test.