Chloe Zhao impresses with her follow up to Songs My Brothers Taught Me, also set in South Dakota’s largest reservation 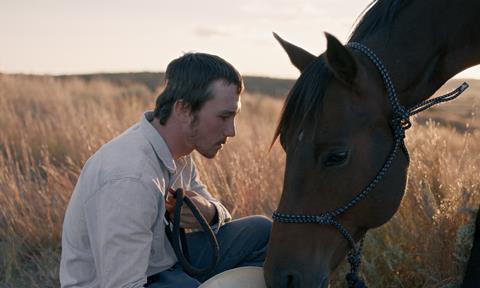 A stubborn young rodeo rider suffers a catastrophic fall in Chloe Zhao’s intriguing, exquisite follow-up to indie hit Songs My Brothers Taught Me. Will Brady – dramatising his own real-life story, like the protagonists of Songs – be able to live a full life outside the ring? Chinese director Zhao’s highly organic process is underscored by the fact that she found this second feature while working on the first, in the Pine Ridge Indian Reservation.

To say the performances are authentic is clearly stating the point, but the Blackburn family opens up to give an easily intimate portrait of themselves

The Rider is a stunningly-shot film, its crisp imagery and livid sound design in natural harmony with piece and its South Dakota settings. On a purely narrative level, Zhao’s story may strain as it edges down familiar routes, but its emotional connections pulsate throughout, making this a natural for festival and arthouse play to Zhao’s growing fanbase. Her approach to fictionalised biography should also be embraced, as it continues to break new ground.

The Rider starts on a seductive note, with burnished close-up imagery of a stallion courtesy of DoP Joshua James Richards, one of the true stars of this show (he also shot Songs, as well as this year’s Sundance British breakout God’s Own Country).  A young man – possibly still a teenager - awakens to reveal a giant gash in his head, sustained at a rodeo. Zhao found Brady Jandreau and his friends and family while on the reservation shooting Songs, and this film mirrors Brady’s own life story: these white-skinned Lakota Sioux are also cowboys and men of the land.

Motherless Brady has been warned that further rodeos – and maybe even horse-riding itself – may kill him. He has a metal plate in his head, and is losing control in his hand thanks to a palsy. His sweet sister Lily is mentally disabled, while his father, although loving, spends too much time drinking, womanising and playing poker off the reservation.

Brady, though, is a gifted horse trainer, with an uncanny knack for communicating with the animals. In some astute and vivid camerawork, Zhao and Richards convey what is later (almost unnecessarily) expressed in words: that this life is so intrinsic to Brady’s entire being that he’s almost fatally compromised without it. Denying rodeo is ripping out his soul. As he miserably works in a mart in an attempt to pay the household bills, Zhao turns us to a point where his desire no longer seems reckless but inevitable.

To say the performances are authentic is clearly stating the point, but the Blackburn family opens up to give an easily intimate portrait of themselves. Brady’s friend Lane, tetraplegic in a hospital after a similar rodeo accident, is also moving. Zhao shows how young the riders are with her support cast drawn from the reservation, and how physically reckless it is – but also how rewarding the kinetic contact with a horse can be. That’s conveyed here with as much force as it’s ever been depicted on screen.

With Richard’s vistas – intimate and wide-screen – blazing pinks and blue skies and majestic plains as well as the intimate experience of the prairie at ground level and equine skin and nostrils, there’s an effective visual jolt that comes with artificially-lit interiors, underlining the stark choices Brady faces. A word must go to Paul Knox and Ben Gieschen’s astute and effective sound design, which works in natural harmony with Nathan Halpern’s moving but restrained score.