‘The Salt In Our Waters’: London Review 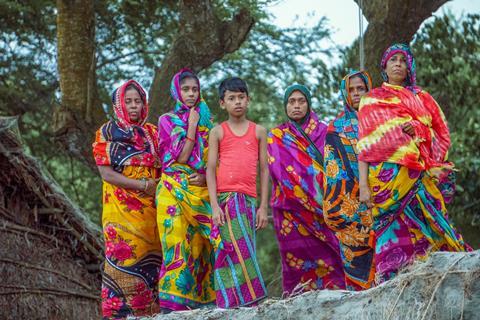 Still waters run deep in Rezwan Shahriar Sumit’s thoughtful debut. This story of an educated artist who travels to rural Bangladesh in search of inspiration is concerned with weighty issues of climate change, politics and religion, but wears them lightly enough to never become didactic. His film is striking enough to attract further interest after its London Film Festival debut, and producers are planning an awareness campaign to launch around Earth Day in April 2021. This, plus support from the likes of Spike Lee — who mentored Sumit at NYU Tisch and provided a writing grant for the development of the screenplay — is likely to help propel The Salt In Our Waters on its journey.

A timely portrait of the opposing forces which shape our world

Titas Zia is hugely likeable as the curly-haired, wide-eyed artist Rudro, who excitedly makes the arduous journey from his city home in Dhaka to a remote fishing village on the Ganges Delta. Accompanying him is a giant crate containing, as he describes it, his “universe”; several of the large statues he crafts either from memory (a beloved bust of his mother is one of his travelling companions) or imagination.

That he has to bribe the port official to release his cargo is a portent of what’s to come, as is the fact that, when he finally arrives, the villagers’ enthusiastic welcome cools when they see the contents of his crate. In this strict Muslim community, such ‘icons’ are viewed with suspicion and fear. Rudro’s explanation that they are works of art with no religious significance will be one he repeats, with increasing frustration, throughout the film.

As Rudro involves himself in the community, he comes to learn how this roost is ruled by the devout but self-serving imam, Chairman (huge Bangladeshi star Fazlur Rahman Babu), who keeps the villagers in line though a system of hefty loans and impossible interest. Money owed means the men have to go fishing every day, even during the furious monsoons that lash the island. Debris from previous storms — huge pieces of driftwood, a gigantic freighter ship — litter the shoreline, a landscape sculpted by the destructive power of nature.

Yet, when fish is hard to come by the men are conditioned to believe they are being punished for their wrongdoings. After another unsuccessful trip, Chairman plants the kernel of an idea that Rudro has brought a curse upon the community. Rudros’s assertions that global warming and rising sea levels are in fact responsible fall on deaf ears. “Out in the ocean there are very clear boundaries,” Chairman pointedly tells Rudros. “Different types of water do not mix.”

As that seed takes root in this traditional community, the tide of opinion begins to turn. Only the local children and Tuni (Tasnova Tammana), a free-spirited young woman who has fallen for Rudro and dreams of life beyond this claustrophobic community, are unswayed by Chairman’s accusations. Rudro becomes increasingly alienated, until a tragic event and an incoming cyclone bring things to a head.

The film’s exploration of the clash between science and religion, modernism and tradition may lack a certain narrative nuance — it’s clear who Sumit believes are the good guys and who are the bad — but  this is nevertheless a timely portrait of the opposing forces which shape our world, distilled through the prism of this tiny community. These ideas are underscored by exquisite, agile handheld photography from cinematographer Chananun Chotrungroj. Tumi’s bright sari, billowing on the wind, stands in stark contrast to the bleached, grey-skied landscape. Scenes of the Chairman calmly invoking religious doctrine to assert his will play against sequences of the men at sea, praying for survival as the squally waves toss their meagre boats like toys. And the constant roar of wind and water is a reminder, whatever your religion or politics, nature doesn’t bend to the laws of man.