‘The Seeds We Sow’: FIDMarseille Review 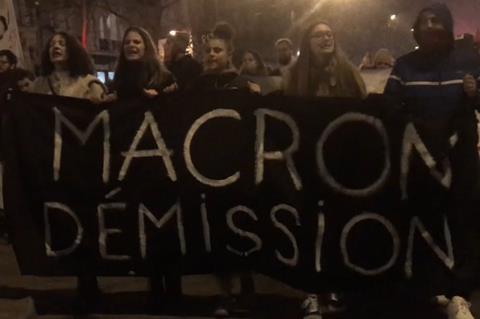 ‘The Seeds We Sow’

Timely and universal in its themes, The Seeds We Sow explores the (fictional) death in custody of 16 year-old Chiara, arrested for spray-painting anti-Macron graffiti, and its effect on fellow high school students. Made at the invitation of the town of Ivry-sur-Seine as part of a project initiated by the municipal cinema and created with the participation of students from the Lycee Romain Rolland, it’s a heartfelt and passionate film, although a little too anchored in the first wave of shock and grief to achieve a satisfying dramatic journey.

Director Nathan Nicholovich developed The Seeds We Sow during a workshop with a group of politically engaged teenagers at a school in the south-eastern suburbs of Paris. The students were already campaigning against ‘Parcoursup’, the higher education admission platform, and education reforms. By introducing the fictional element of the death of a fellow student, Nicholovich explores the very genuine anger and mounting frustration of this next generation of protestors.

The issue with this device, however, is that any death, but particularly the death of a child in police custody, exerts an overarching gravitational pull which distorts the rest of the story around it. So what we witness on screen is not always the true representation of high school life that Nicholovich was clearly aiming for. Add to this the use of long, unbroken shots, in which the camera inches forward incrementally. It’s a powerful technique, but one which places a great deal of weight on the shoulders of performers who are unaccustomed to carrying any scene, let alone one which encompasses several minutes in a single take.

The film was created as part of an educational project and is, perhaps, best viewed in the same way: as a learning tool and a jumping off point for other students of film and communications to go on and create their own work. Limited by non-professional performances which are adequate but don’t have that extra spark to make a scene compelling, and by writing which lacks direction and drive, The Seeds We Sow may struggle to connect with audiences outside of the educational arena, although further festival screenings are not out of the question.

The dead girl, Chiara, is sketched through the testimonials of her friends, teachers and fellow pupils – she is praised as fearless, ever ready to speak up against perceived injustice. But she is also, it becomes clear, provocative and teasing. We see the amateur footage she shot of her debating buddies who snap in irritation as she zooms in on their noses and eyebrows. None of the other characters are sufficiently textured and complex to really assert themselves in the film, although we do get a sense that several of them are at a pivotal moment in their political consciousness.

One scene stands out however – a speech by a teacher who talks about philosophy, literature and her own eccentric earring choices. She’s articulate and inspiring; it’s a moment of breakthrough which parts the clouds of grief and reveals a sense of purpose.