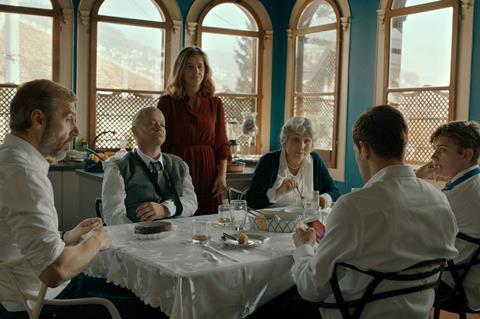 The minefield of young Balkan masculinity is particularly treacherous for Arman (Dino Bajrović), a nearly eighteen-year-old who wears his status as an adopted son like a wound that will never heal. He’s the older of Jasna and Senad two children; his younger brother Dado is their biological child. Feelings of rejection cause Arman to constantly test his mother and father; meanwhile they start to question their own fitness as parents. Ines Tanović’s picture looks at the expectations that a disappointed generation place upon their children, and at the temptations and distractions offered up to the youth in this transitioning society.

The second feature from Bosnian filmmaker Ines Tanović is another chapter in a loosely linked series which started with her contribution to the 2010 portmanteau picture, Some Other Stories. The Son focuses on the younger generation of the same Sarajevan family which were also the focus of her first feature, Our Everyday Life. As such, it’s a strong choice of opening picture for the 25th edition of the Sarajevo Film Festival. Not only does the film make evocative use of the locations offered by this most photogenic of cities, it gets under the skin of a generation for whom the siege is something they recognise in the damage it carved into the psyche of the city and its people, but that they never experienced themselves. Further festival slots are likely, but while Balkan audiences will pick up on a very specific dark humour and may recognise, even forgive, the exhaustingly confrontational masculinity, the picture may struggle to connect to the same degree further afield.

Tanović adopts a deliberately restrained, unshowy approach. The story unfolds almost entirely in long mid shots, with very little in the way of close ups to guide our sympathy. Even so, there’s no question that this is Arman’s story. Just as he sucks the oxygen from his family life with his wind-milling aggression, Arman dominates the film. This is not always a good thing, although it does attest to the formidable screen presence of Bajrović.

The film opens which what turns out to be the most interesting shot. Arman, in a taxi, drives away from the family home, through the weaving streets of Sarajevo and towards the airport. His show of bravado to Dado, who begs for the latest Grand Theft Auto on his return, cracks once the car pulls out, and his eyes moisten. His journey – to meet his birth mother – turns out to be in vain as she fails to turn up to meet him.

Back home, Arman’s fury kicks up a notch. The well-appointed home of Jasna and Senad, not to mention the emotional resilience of his parents, bears the brunt of his destruction, but he also turns his anger inwards. He dabbles in drugs, guns, truancy and so much butting of heads with other teenagers that you wonder if the entire male population of the city is concussed. There’s hope, too, in a relationship with Milica, a Serbian girl who has recently returned to the city.

One of the film’s most striking moments is a walk the couple shares along the derelict bobsleigh track high above the city, a graffiti-scrawled relic of the 1984 winter Olympics and of a more optimistic time. And if the self-sabotaging Arman represents the state of the city as a whole right now, it’s a moment of hope which is unlikely to be regained imminently.