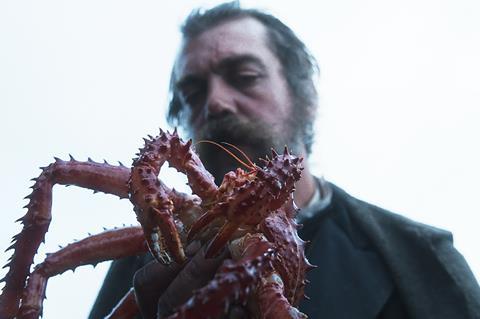 ‘The Tale Of King Crab’

”In the old days, there was no TV,” an old man says. ”People sat around at night telling stories.” But had TV existed, what people watched might have looked very much like The Tale Of King Crab. Comprising two dramas worked up by Alessio Rigo de Righi and Matteo Zoppis from the tales told, and the songs sung, by the huntsmen of Vejano in central Italy, this intriguing piece is indeed a documentary record, but also an engaging and thought-provoking film in its own right, one that always feels as though it’s coming from a different and interesting place. It’s this distinctive air that has led doc/drama hybrid Crab to walk sideways into positive receptions at several festivals, a trajectory that’s likely to continue.

When the music and the images fall into perfect lockstep, the effect is striking

The film features intermittent, fleeting fly-on-the-wall footage of the real-life huntsmen chatting, but most of it is devoted to the two reenactments. At some unspecified date around the turn of the twentieth century, Luciano (Gabriele Silli) returns to Vejano and starts to shake things up. First, he falls in love with Emma (Maria Alexandra Lungu, the project’s only professional actor), the daughter of farmer Severino (Severino Sperandio, whose face in a close-up will represent the film’s scariest moment). An alcoholic with matted hair and beard who everyone thinks is mad, Luciano, despite his piercing eyes, is hardly the right suitor for Emma — especially after he angrily breaks down a door which has been summarily closed by the Prince (Enzo Cucchi) because it will block an upcoming procession through the village.

Tragedy is the inevitable result of the outsider Luciano’s passion and rebelliousness, and he is banished to the far ends of the earth, quite literally — to Patagonia, where the second act (graphically entitled ‘The Asshole Of The World’) plays out, and where the language changes from Italian to largely Spanish. Despite the stunning settings, this section is less impressively put together than the first, cleaving too closely (if we ignore the magnificent titular crab) to the traditional tropes of the Western.

Luciano has assumed the identity of a dead priest, who has given him clues about how to find treasure buried centuries before following a shipwreck. Pursued by a gang of gold diggers led by Lennox (Dario Levy), Luciano will spend much of the second part of the film carrying the crab in a bucket around the forests, lakes and mountains of Patagonia, driven by the impossible, time-honoured hope that it will lead him to the treasure.

The Tale Of King Crab closes a trilogy by de Righi and Zoppis — so far comprising the more traditional documentaries Belva Nera (2013) and Il Solengo (2015) — about the legends the huntsmen share. When folk tales are reenacted on screen, psychological nuance often goes missing, but here there’s a raw, elemental power as the characters submit themselves to the primitive emotions of power, greed and, of course, love. Watching The Tale Of King Crab feels like watching the stories on which all later stories have been based.

You also get brooding intensity and slippery, dreamlike atmospherics and dialogues that strip things back to their essentials. ”We spend our time trying to find meaning,” the embittered Luciano intones, ”but deep down we know we are nothing.” It’s not easy to find films in which such utterances aren’t risible, but this is one of them.

Silli is not a professional actor (and most of the rest of the non-professional cast can be seen playing different roles throughout), but as the film’s unquestionable centrepiece, he certainly knows how to hold the camera with a tortured gaze and heavy silences. Mention must also be made of the elderly huntsmen, who as de Righi and Zoppis have long known, are totally compelling just being themselves in front of a watchful lens.

The music is central. Vittorio Giampietro’s percussion-based score apart, the film is punctuated by plaintive regional folk songs whose lyrics act as a necessary commentary on the action. These are often hauntingly delivered by one singer, but there are a couple of a cappella pieces too, as soaring voices timelessly, effortlessly and magically combine. When the music and the images fall into perfect lockstep, as when the lone, remote figure of Luciano stumbles across the bleak landscapes of Patagonia, the effect — like much of the rest of The Tale Of King Crab — is striking.