'The Truth Beneath': Busan Review 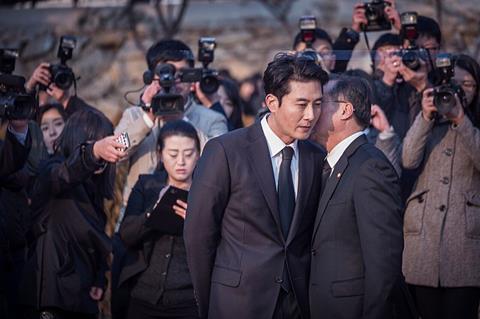 In what has been a very strong year for Korean cinema, Lee Kyoung-mi’s (Crush and Blush) daring but accomplished political thriller The Truth Beneath has been somewhat overlooked, especially locally. Re-positioned at Busan and co-written by Park Chan-wook, her second feature - which follows the wife of an aspiring politician in the search for their missing daughter - is likely to stand the test of time. For fans of Korean genre cinema, it’s certainly set to resonate.

After a low-key June opening in Korea, it is now belatedly beginning its journey on the festival circuit and will open the London Korean Film Festival in November, amongst other dates.

Jong-chan (Kim Joo-hyuk), a former news anchor who is now looking to become a politician, has secured the nomination for the Korea Party in the area of Daeson in what is seen as tight race going up against the lawmaker Noh Jae-soon (Kim Eui-song). However, on the first day of his campaign, Jong-chan’s daughter Min-jin (Shin Ji-hoon) suddenly disappears.

Min-jin’s anxious mother Yeon-hong (Son Ye-jin) begins searching for her, but her husband - whose main campaign promise is to “protect our children” - agrees to wait another day before officially reporting her missing, noting the importance of their daughter’s image to his career.

Yeon-hong, though, takes matters into her own hands by going to the police, hunting through her emails, sketchbooks, obtaining police records, and talking to her teacher Son So-ra (Choi Yu-hwa) and Min-jin’s closest friend, Mi-ok (Kim So-hee). As she does, she uncovers a web of deceit that turns her life upside down.

The dark side of Korean politics has been explored in other recent Korean films such as Inside Men and Asura: The City of Madness(currently on domestic release). Both expose the rampant corruption that remains a fixture in local headlines. The Truth Beneath, however, is bolder in its approach to style through its elaborate mise-en-scene, while its complex storytelling - which oscillates between different spaces, both past and present, in montage fashion - makes it an engrossing viewing experience.

Thematically, rather than paying close attention to relationships within the realm of a political class that is largely dominated by men, The Truth Beneath focuses on a female protagonist, bringing to light the impact political ambition can have on a family, in this case a mother/wife and daughter, making Jong-chan’s pledge not only meaningless but wholly hypocritical.

The film’s camerawork and production design are superb. Although, in some ways the styistic emphasis is reminiscent of Lee Kyoung-mi’s mentor Park Chan-wook’s expressionist sensibilities, she is cautious to not overdo it. In her last film, Crush and Blush, the actor Kong Hyo-jin delivered a career defining performance. Son Ye-jin replicates that here. Starting out as a caring and supporting wife, she impressively embodies Yeon-hong’s complex changes of emotion and personality as she learns more about her husband. Kim Joo-hyuk (Yourself and Yours) and the remainder of the cast all deliver strong performances, but it is Son that shines, and she has never been better.