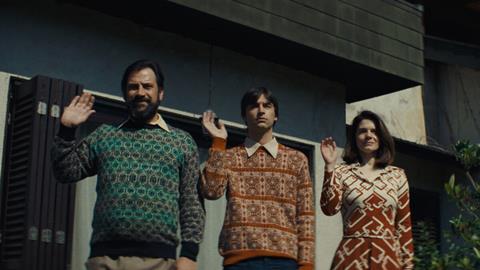 A claustrophobic nightmare unfolds gruellingly in Croatian writer-director David Kapac and Andrija Mardesic’s effective but derivative feature debut The Uncle (Stric). Bowing in the inaugural Proxima competition at Karlovy Vary, it’s a handsomely-mounted calling-card whose script plays like an opportunistic cross between Michael Haneke’s Funny Games and Yorgos Lanthimos’s Dogtooth. Staking out terrain somewhere between psychological drama and horror, it should enjoy further festival play but looks theatrically viable only in ex-Yugoslavian territories.

An exercise in thumbscrew-turning unpleasantness

In the latter region, septuagenarian lead Predrag ’Miki’ Manojlovic retains star status nearly half a century after his small-screen breakout in cult Yugoslavian TV show Grlom u jagode. Best known internationally for his collaborations with Emir Kusturica, Manojlovic here enjoys what surely ranks high among the most sinister roles of his career as the eponymous antagonist of Kapac and Mardesic’s wrongfooting affair.

Early scenes seem innocuous enough, as a family — mother (Ivana Roscic), father (Goran Bogdan) and twentysomething son (Roko Sikavica) — nervously await the arrival of “uncle” (none of the characters are named) for his annual Christmas visit. Immaculately attired, the gent duly turns up in his Mercedes complaining about a 600km drive from Munich; with each moment the supposedly festive mood becomes increasingly strained and off-kilter.

Dowdy clothing and decor, plus passing dialogue clues, give the definite impression that the period is the 1980s. So how come Uncle has a very 21st-century mobile phone? The truth emerges in haltingly piecemeal fashion — requiring attention and patience from the viewer —  and eventually is revealed to include kidnapping, violent coercion and psychological abuse verging on mental torture. At each stage the tension is steadily increased, setting up a climax of seemingly inescapable bloodshed and catharsis.

Kapac and Mardesic’s previous writing collaborations include a pair of 2012 outings both featuring Roscic in a prominent role: cannibalism-themed 45-minute Zagorski Specialitet for TV (directed by Kapac) and Iris, a 29-minute neo-noir comedy directed by Mardesic, also starring Bogdan. One year later they teamed up to write (Kapac) and direct (Mardesic) one of the three segments in portmanteau Short Circuits — which also showcased the talents of writer-directors Hana Jusic and Sonja Tarokic.

Both of the latter have gone on to notch notable feature debuts: Tarokic’s The Staffroom competed for the Crystal Globe at Karlovy Vary last year; Jusic’s Quit Staring at My Plate scored considerable success on the festival circuit in 2016. Like The Uncle, it is a clammily intense survey of unusual family affairs taking place almost entirely in and nearby a single residence. But whereas Jusic’s queasily oneiric film struck a fresh and original balance between dramatic and comic elements, The Uncle never quite emerges from the shadow of its obvious thematic and stylistic antecedents.

It can perhaps be described charitably as an accomplished apprentice work, providing ample evidence of talent in unfinished form as well as a solid showcase for the tight little ensemble. Promising Croatian newcomers aren’t exactly thick on the ground just now, and Kapac and Mardesic remain names to watch — even if much of their film’s impact depends on the cinematographic contributions from a more well-established talent in DoP Milos Jacimovic.

Previously responsible for Serbian writer-director Ivan Ikic’s two features Barbarians (2014) and Oasis (2020) —Jacimovic also shot the monochrome video for Interpol’s single “All the Rage Back Home,” with 24 million YouTube views and counting. He achieves a rich and deep analogue look here using Hawk Anamorphic lenses. This helps ensure that, even if The Uncle is ultimately little more than an exercise in thumbscrew-turning unpleasantness (takeaway moral: don’t indulge psychopaths!), it’s certainly a stylishly executed one.