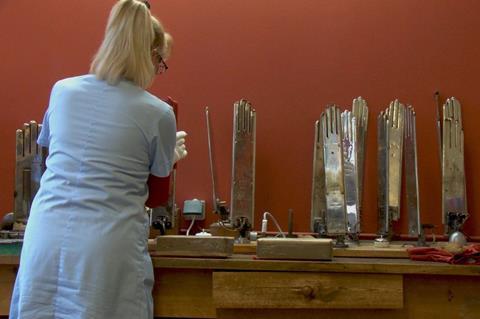 More than a decade after his previous foray into the workplace, Daniel Eisenberg returns with The Unstable Object II. Like its predecessor, the film closely observes three businesses, accumulating a portrait of their start-to-finish production processes and working life. The epic running time will be daunting for many viewers but there is something inherently fascinating in watching other people toil, making this an absorbing, thought-provoking watch. (Eisenberg has stated his intention to break the film into three features for subsequent screenings.) Awards at FID Marseille, including the Grand Prix in the International Competition section, should ensure interest from other festivals, and also galleries where it would sit comfortably as an installation.

Sometimes compelling, sometimes challenging, The Unstable Object II is a film about inequality and the connections between production and consumption

Eisenberg is a believer in “durational observation”; his style requires time to slow down, and for the committed viewer to absorb a vast resource of visual information. This film begins at the Ottobock factory in Germany as we follow the making of prosthetics, and the care and attention that goes into the creation of an amazingly life-like hand. There are elements of mass production as well as individually customised items. Athlete Dominique Bizimana lost a leg fighting for the Rwandan Patriotic Front (RPF) and arrives in Germany for the fitting of a new limb. We watch as workers cut, saw, shape and hammer. There is an air of calm efficiency, craftsmanship and the satisfaction of an end product that will improve a life.

Equally satisfying is the work of the haute couture glove-making Maison Fabre in Millau in the south of France. The company has existed for almost a century and watching the small group of women at work is like stepping back in time. There is a great clutter of old sewing machines, patterns, paraphernalia and tools of the trade. Everything seems to be created by hand as we watch material being measured, cut, shaped, stitched and treated with respect. The end product is an elegant pair of leather gloves retailing in the company shop at anything from 100 to 140 Euros.

If the creative process in France is artisanal, the jeans factory we witness in Turkey is a far more industrial set-up for the film’s final section. There is an unrelenting pressure to deliver as around 800 workers maintain a frenetic pace to create 2,00 pairs of jeans each day. Repetitive tasks numb the brain. An incredible collective effort goes into making brand new jeans look aged and distressed. Ear phones and face masks are a necessary protection against brutal levels of noise and the dangerous chemicals as jeans are dyed, ripped and made presentable for the demands of a global fashion market.

There is no significant dialogue in The Unstable Object II, no commentary, context or narrative hook. Instead, this is a chance to observe and ponder. It is a film about hands and legs; from the manufacture of new limbs, to the creation of gloves and trousers via the nimble digits of expert workers skilled in their trade. It is a film of places and scale; the long winding corridors in Ottobock, the cavernous, oppressive factory in Turkey and the more cosy, comforting work room in France.

Sometimes compelling, sometimes challenging, The Unstable Object II is also a film about inequality and the connections between production and consumption. Who will receive the best prosthetics available? What are the economic disparities between the workers making luxury gloves and sturdy jeans and the people who are buying the things they create?

Along the way, it is startling to discover how much of the work on display here is still undertaken by human hand. There is an assumption that time and technology will one day combine to make all of this obsolete. In some respects, the cumulative impact is an elegy for the workplace and the people who toil there.