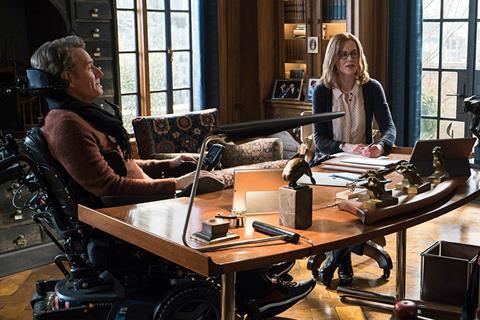 Olivier Nakache and Eric Toledano’s 2011 hit Intouchables so charmed the world that it left big shoes to fill. Limitless director Neil Burger manages to make the original material feel like a snug fit in his slick American remake The Upside. The central odd-couple characters effectively utilise both the comic skills and dramatic abilities of Bryan Cranston and Kevin Hart, whose affectionate chemistry provides a large part of the film’s appeal. Mainstream audiences should respond to the undemanding combination of laughter and tears especially if they haven’t see the French original and aren’t concerned by a race dynamic that sometimes steers in the direction of Driving Miss Daisy.

The Upside is the sum of its good players and dubious politics, wrenching genuine tears from a story that celebrates the rich promise of life in all its shades of joy and heartbreak

A restrained Hart is at his most engaging as Dell, an ex-con struggling to get his life in order, step up to his responsibilities and reconnect with his son. Obliged to pursue a number of job applications, he stumbles into the interviews for the post of auxiliary nurse to millionaire Manhattan quadriplegic and grief-numbed widow Phil (Cranston). He has no qualifications for the job and certainly fails to impress Phil’s frosty assistant Yvonne (Nicole Kidman), but his wise-cracking irreverence is like a ray of sunshine in Phil’s gloomy, tightly monitored existence. Dell is hired as a live-in carer and it is the beginning of a beautiful friendship.

The Upside milks some easy laughs from Dell’s fish out of water status in his new abode as he is introduced to the joys of kumquats, voice-operated German-language power showers, catheter changing and the glories of opera. In return, he offers Phil an introduction to the simpler but no less valid pleasures of neighbourhood hot dogs, medicinal marijuana and the queen of soul Aretha Franklin.

Told in flashback and one step removed from the true events that inspired Intouchables, The Upside is a likeable bromance between two men from the opposite side of the tracks. Cranston plays Phil with a great deal of dignity and understatement. Confined to a wheelchair and only able to move his neck, Phil obliges director Neil Burger to place the focus on Cranston’s expressive features and he conveys a great deal of his character’s stoicism and pain in a weary lift of an eyebrow, a wry smile or an angry howl. The pitch of his performance seems to have encouraged Kevin Hart to dial down his natural ebullience - there is a sense of quick thinking comic improvisation in some of his scenes but there is also a good deal of heart and effort to make the character and his relationships convincing.

Nicole Kidman’s modest supporting role as the forbidding Yvonne is handled with typical professionalism and Julianne Marguiles makes a strong impression in her brief scenes as a possible romantic interest for Phil.

The Upside looks suitably sleek amidst all the wealth and privilege of wealthy Manhattanites. It is undoubtedly corny and manipulative and Dell’s sudden passion for opera and desire to become a painter might not chime too readily with the more cynical viewer. In the end, The Upside is the sum of its good players and dubious politics, wrenching genuine tears from a story that celebrates the rich promise of life in all its shades of joy and heartbreak.