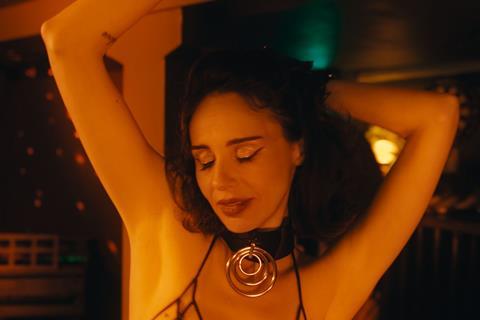 A thirty-eight-year-old woman (Shirly Lev) with a taste for men in their early twenties prowls the dating apps and streets of contemporary Berlin in search of company, sexual and otherwise. This unintentionally funny, tone-deaf English language erotic drama attempts to challenge societal prejudices and norms when it comes to relationships between older women and younger men. But by entirely defining the central character, Nora, by her sexual tastes and by making practically every line of dialogue about age and age gap relationships, it seems that it is the film, rather than society as a whole, which is obsessed with the subject.

It’s fair to say that The Vagabonds feels somewhat out of place in the Cannes Film Festival program. It screens in the Special Screenings strand as the result of arrangement made when director and co-writer Doroteya Droumeva (on whose relationship proclivities the film is based) won the Cinefondation Award with her short film The Letter in 2011. This meant that her first feature would have a position in the Cannes Film Festival. It’s a well-meaning initiative but one which, in this case, means that a film which seems to be unfinished (the sound mix is missing in action) and is certainly unpolished finds itself placed under the acute and unforgiving scrutiny that a Cannes selection warrants. The commercial potential of the picture would seem to be limited, unless the filmmakers decided to play up some of the more ludicrous elements and aimed for cult viewing status, like Tommy Wiseau’s The Room.