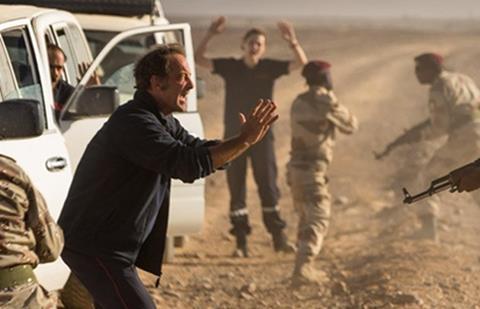 A group of French do-gooders turns out to be arguably not-so-good-doers in The White Knights (Les Chevaliers blancs), Joachim Lafosse’s fact-inspired take on the machinations of an NGO that represented its mission one way while sneaky intentions pointed another way entirely.  A compelling cast of characters whose convictions are put to the test in the inconvenient crucible of war-torn sub-Saharan Africa make this film as watchable as it is disturbing.  With desperate migrants perishing or washing ashore in unprecendented numbers in Europe, this timely film asks what might constitute a better life for non-Westerners and who gets to decide.

The proceedings unspool in a comparatively low-key matter-of-fact fashion. The secret clock is ticking and yet there is no artificial drama

A batch of white French-speakers arrive in Africa (the actual epsiode took place in Chad) and proceed in an armed convoy to the compound local fixer and pilot Xavier (Reda Kateb) has arranged for humanitarian organiser Jacques Arnault (Vincent Lindon) and his staff of allegedly selfless volunteers. Their stated purpose is to take in war orphans no older than the age of five in order to feed, educate and nurture them until the age of 18. Jacques assures local residents and the people living in more remote tribal outposts that his organisation is there for the long haul.

But what viewers gradually understand is that ‘Move for Kids’ is the cover story for an outfit with a strict 30-day window to collect 300 children under the age of five and spirit them back to France where foster families are waiting to adopt them. They hope to find ten kids a day for the next 30 days to administer vaccinations. So they’re peeved when orphans under five — the upper limit for forming a bond with one’s adoptive parents, we’re told — are hard to come by. And they’re especially peeved when village parents, taking the foreigners at their word, start dropping off their non-orphan offspring hoping their kids can benefit from health services and other promised building blocks of a better life. After all, if ‘Move For Kids’ is going to be there for “a long, long time” what possible difference could it make if the kids in question still have parents or not?

Convinced that they “have no choice” but to carry on their unethical charade in order to arrive at a greater good, the visitors’ behaviour ranges from tangentially admirable to thoughtless to dangerous to just plain stupid.  Journalist Françoise Dubois (Valerie Donzelli) starts out as a neutral observer with a strict code of conduct only to confront a slippery slope. Drawn from local ranks, translator Bintou (Rougalta Bintou Saleh) is an indispensible cog in the operation. Jacques, who fancies himself a pragmatic leader, never met an obstacle he doesn’t think can be overcome with cash or lies, or both.

It’s such a drag that cute little orphans can’t be scooped up as easily as seashells at the seashore. And just because the place you’ve picked for your beneficence has its own longstanding customs and rituals doesn’t mean that Western tactics and values are out of place. “Trust me” and “Trust us” get said an awful lot by people who aren’t all that trustworthy.

Although there are serious disagreements, any number of plans fall through and the terrain is perilous, the proceedings unspool in a comparatively low-key matter-of-fact fashion. The secret clock is ticking and yet there is no artificial drama — just a series of misguided mini-adventures and setbacks that raise thorny questions about what form foreign aid should take so as to not do more harm than good.