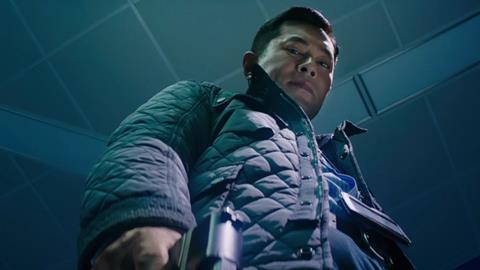 A desperate cop and dutiful surgeon clash over the fate of a seriously wounded criminal in Johnnie To’s latest thriller, staged within the claustrophobic confines of a single hospital location. The promise of flashy gunplay and inventive camerawork should be sufficient to entice To’s legions of global fans and ensure solid numbers when the film opens day-and-date in China and the US on 24 June. Zhao Wei adds a touch of glamour to a cast of Milkyway regulars, headed by Louis Koo and Wallace Chung, which should also help the film extend its reach beyond To’s fanbase on the mainland. But the veteran Hong Kong director makes his audience wait for the promised fireworks, and Three’s flimsy premise never quite captures the grounded realism of Drug War or Election, or the visual flourish of Exiled or Vengeance.

Rushed to hospital in police custody with a bullet lodged in his brain, violent criminal Shun (Chung) may only have minutes to live. Inspector Chan (Koo) needs the location of his gang and their next target, while neurosurgeon Dr. Tong (Zhao Wei) wants Shun in surgery as soon as possible. Regaining consciousness, Shun proceeds to taunt his captors from the confines of his hospital bed, stalling for time until his cohorts arrive to rescue him in a bloody final showdown.

The ward is populated by more of Tong’s patients, each exhibiting a different brain injury or neural condition, which gives an insight into the doctor’s intelligence and proficiency while ensuring roles for the likes of Lo Hoi Pang and Timmy Hung, When Chan arrives with his unit in tow, Tong refuses to go off duty despite her obvious exhaustion, and her commitment to her patient’s rights often puts her at odds with the cops.

Chan is determined to bring Shun down at any cost, even resorting to framing him for a fellow officer’s murder. His lack of interest in Shun’s medical well-being sees him frequently clash with Dr. Tong, a problem he handles poorly - joking at one point that Tong’s bad mood is because she is menstruating and even slapping her across the face when she protests his actions.

Exposing Chan’s flaws and Tong’s insistence on putting procedure ahead of justice leaves Three without an obvious sympathetic protagonist. While this should add a layer of ambiguity to the drama, instead it serves only to distance the audience from the already thinly-sketched proceedings. Wallace Chung pitches his villain as a charismatic intellectual, quoting Bertrand Russell and the Hippocratic Oath as he attempts to pit law enforcers against healthcare professionals. But neither Chung nor To can sell the character convincingly, veering into pantomime villain territory all too easily.

When Shun’s gang finally does arrive, infiltrating the ward in disguise before unleashing a tirade of bullets and explosions, To reminds us why he’s still regarded as Hong Kong’s foremost action director. In a four-minute single take that snakes down corridors and encircles all the principals, To depoys a range of speed-ramping techniques and impossible angles to bravura effect.

Tech specs throughout are competent rather than outstanding. Recent offerings like last year’s Office show To is still capable of challenging himself technically, while 2011’s Life Without Principle saw him engage with Hong Kong’s socio-economic plight. Three may recall some of To’s past successes both narratively (Running Out of Time) and stylistically (Breaking News), but too often feels like the team itself is convalescing rather than building on its strength.