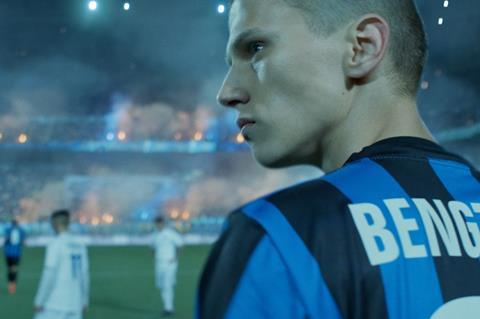 Based on the real-life story of 16 year-old Swedish soccer wunderkind Martin Bengtsson, Tigers is a rare and refreshing entry into the sports movie genre. Rather than follow the well-worn narrative trajectory of struggle followed by success, the picture looks instead at the considerable cost of excellence. Tigers takes us inside the gilded cage inhabited by top tier, rising star footballers. Following a year in the life of a teenager whose dream is realised when he is bought by an Italian club, but who quickly realises that having a hefty price tag doesn’t necessarily improve his own self-worth, the film tackles head on the taboo subject of mental health issues in professional football.

A propulsive account of vulnerable young men flung into a world in which failure is a fate worse than death.

The sophomore directing outing from Ronnie Sandahl (his first was Underdog), this represents the second film in a self-penned sports trilogy. The first, Borg Vs. McEnroe, was directed by Janus Metz; the third, about the world of gymnastics and titled Perfect, sold to Searchlight Pictures and is set to be directed by Olivia Wilde. Driven by a scalding performance from a bullet-eyed Erik Enge, this is a propulsive account of vulnerable young men flung into a world in which failure is a fate worse than death. Further festival screenings will likely follow the film’s debut in Busan and Rome, and it should appeal to arthouse distributors and streaming platforms looking for quality productions with potentially broad appeal.

With his fanatic’s unblinking stare and steel-cable muscle tone, Martin (or Matti as his mother calls him) has a drive for perfection which sets him apart from other boys his age. In kindergarten he calmly announced that he planned to be a professional footballer. At the age of eight, he trained so hard that he had to crawl home from the pitch. Now at 16, he is one of the most promising soccer talents that Sweden has ever seen. It’s the kind of athletic gift which is all-consuming. Martin spends almost every waking moment working out or writing, in a neat purposeful hand, motivating notes to himself: “Train. Eat. Recover. Don’t overthink.” Even so, he is knocked off kilter when he arrives in Milan to discover that his teammates, far from celebrating his success, are largely hoping for him to fail.

There are only so many slots in the training program. Martin’s arrival means that someone else will have to go. There’s another factor which undermines that nervy, clenched focus – an absent father whose approval Martin longs for, but who has no part in his life right now.

Marek Septimus Wieser’s lithe, watchful camera captures both the churning tensions amongst these volatile, ultra-competitive young men, and the flickers of doubt that start to cloud Martin’s face. The level gaze is punctuated by nervous blinks; his fingers worry at the scabs and scars of past injuries. The lonely teenage kid, with a gauche child’s grin full of metal braces, is further isolated by the language barrier. He strives to fit in, buying a flash car even though he has no license and no idea how to drive it. Connections with Ryan (Alfred Enoch), an easy-going American goalkeeper, and Vibeke (Frida Gustavsson), a Swedish model currently living in Italy seem to be a lifeline. But when, in quick succession, both are stripped from his life, Martin’s struggle with anxiety, depression and doubt looks set to defeat him. Enge’s already raw performance sharpens to convey the desperation of a boy whose wishes may come true, but may also carry an unbearable cost.