A holiday complex is anything but paradise in this sinister tale 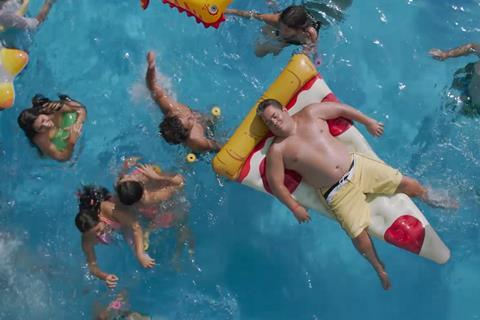 Trouble in paradise is measured by exasperated guests, disgruntled employees and a sense of impending doom in Sebastian Hofmann’s Time Share (Tiempo Compartido). The second feature from the writer/director of Halley (2012) invests a surreal, gaudy satire with unsettling elements of horror, grief and paranoia, and displays enough originality and intrigue to likely travel widely following its Sundance world premiere.

Assured in its storytelling, the film unfolds to a carefully crafted soundtrack

A prologue introduces us to hotel entertainer Andres (Miguel Rodarte) as he suffers an emotional breakdown. Five years later, Pedro (Luis Gerardo Mendez), his wife Eva (Cassandra Ciangherotti) and their son Raton arrive at a holiday resort that promises to “make dreams come true”. Their joy at a hard-earned break is short lived. Abel (Andres Almeida) arrives with a reservation for the very same bungalow and the two families are obliged to share their accommodation. It is the first of many frustrations and disappointments that threaten to push Pedro over the edge.

The holiday resort is part of the “Everfields Family” and Hofmann quickly creates the impression of something sinister lurking beneath the perfectly manicured lawns, shimmering pools and welcoming employees. This is an establishment with echoes of Westworld or The Stepford Wives, and there seems to be clear affinities with the oddness of the hotel that was such a crucial feature of Yorgos Lanthimos The Lobster.

Unease is exacerbated by the presence of a depressed-looking Andres, who now works as a lowly employee in the resort’s subterranean laundry service whilst his wife Gloria (Montserrat Maranon) strives to prove her loyalty and dedication to Everfields by becoming one of their top time share sellers.

As Hofmann gradually reveals more about the personal circumstances of Pedro and Andres, it becomes clear that the sense of something awful going on is much a reflection of their paranoia and vulnerabilities as it of the ruthless, heartless corporate ethos of Everfields.

Assured in its storytelling, the film unfolds to a carefully crafted soundtrack that is a constantly whirring assault of buzzing mosquitoes, droning air-condition and dripping water. Hofmann emphasises the grotesque from the scorched flab of sunbathing tourists to the recurring motif of a pink flamingo seen throughout from the wallpaper design and the visions that start to afflict Andres. Hoffman also has a fondness for the extremes of scale, with intense close-ups capturing the agony and anguish that confirm a bond between Andres and Pedro while lofty overhead shots show the oblivious, insignificant armies of holidaymakers caught in the warm embrace of the Everfields family.

Bunuelian in its brash satire of corporate ambition, Time Share can be as blackly comic as a Coen brothers screenplay; particularly in its treatment of Pedro, whose suffering reaches some kind of peak in a humiliating tennis lesson that leaves him with a spectacularly broken nose.

Sustained by an enthusiastic score that jauntily skips from the comic to the sinister, Time Share is constantly captivating and works hard to encourage the viewer to always assume the worst. The fact that there may ultimately be less here than meets the eye does not detract from an ambitious, eye-catching work that should mark a significant advance in appreciation for Sebastian Hofmann’s work.