'To The Bone': Sundance Review 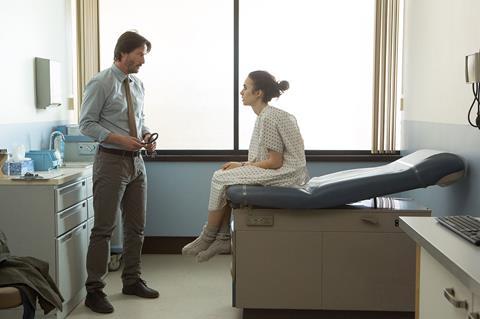 Lily Collins – already waif-like – slims down alarmingly in To The Bone, Marti Noxon’s worthy attempt to tackle the alarming plague of eating disorders which is destroying the lives of young children. Conventionally couched, and sometimes surprisingly funny, this is a film which feels as personal as it is (writer-director Marti Noxon has part-based it on her own life, and Collins has recently revealed her own struggle with the disease). Spurred on by the actress’s strong performance, To The Bone may help those touched by anorexia and its associated illnesses, but will be a tough sell outside that group.

The fact that To The Bone is so conventionally structured leads us to immediately understand that we’re on a journey with Ellen, and the success and failure of that trip will depend on how much we care about her fate

The 2015 Swedish title My Skinny Sister, which viewed the disease through the eyes of a victim’s younger sibling, enjoyed a long run on the festival circuit and some small commercial sallies in international territories. To The Bone can look at the same trajectory, although appetite in the United States may be stronger for this Los Angeles-set film. Reviews should be respectful of the honesty of the project and its central performance.

To The Bone can feel, in certain parts, like the eating disorder version of the drug and alcohol genre: all the tropes are there, including the failed clinics, the chain-smoking, the desperate parents, the group therapy, the troubled attempts at relationships. When Collins’s central character of Ellen – later Ely - enters a half-way house (run by doctor Keanu Reeves) and makes friends with her fellow inmates, it seems as if it’s only a matter of time before someone’s condition will worsen and prompt a third-act change in Ely’s circumstances.

Still, however, Noxon – making her film debut after a long and successful career in TV – manages to layer these moments with perceptive explorations of the roots of the disease. And her final sequences do soar away in an unexpected manner towards something more lyrical and moving.

World premiering in the US Dramatic Competition at Sundance, To The Bone starts out with a ghastly shot in a hospital corridor, with stick figures emerging into the light only to remain stick-like. These are anorexic children, girls – and boys – who obsessively calorie-count, purge and exercise, even to the point of death. There is some thought that they are trying to delay the onset of sexual maturity, and Noxon makes sensitive reference to this when Ellen, a stubborn anorexic, meets up with a British ballet dancer, played by Alex Sharp with varying degrees of success (his Britishness seems to be signposted by the fact he wears a cravat under his sweatshirt).

Ellen doesn’t want to be part of Dr Keanu’s “radical” therapy, but her home circumstances lead her inexorably to this point: a completely absent father, a loving but uncomprehending step-mother (played warmly by Carrie Preston), and a “bi-polar lesbian” mother (Lily Taylor) who lives in Arizona with her girlfriend (Brooke Smith). Her step-sister (Liana Liberato) is her only true friend. This is comfortable, first-world suffering (as pointed out in a joke by a Jewish anorexic), but everyone seems aware of that fact.

The fact that To The Bone is so conventionally structured leads the viewer to instantly understand that we’re on a journey with Ellen, and the success and failure of that trip will depend on how much we care about her fate. To that end, Lily Collins does exceptional work in a role which clearly involved a degree of weight loss which will make audiences uncomfortable, as it is clearly designed to do. Apart from the opening and end shots, To The Bone is  played straight visually, something the film’s target younger audiences may be more comfortable with than the art-house set.