'To The Fore': Review 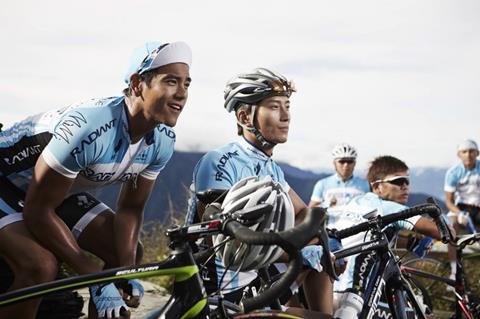 Dante Lam returns to sports-based drama after the success of 2013’s Unbeatable, which scored US$5.7m at the Hong Kong box office (and US$18.5m in China) to become the year’s most successful homegrown offering. Throwing his net wider than the MMA cages of that film, To The Fore follows a trio of professional cyclists as they ascend into the sport’s top tier.

Lam’s script feels somewhat superficial compared to his previous films, which have showed a repeated fascination with the psychology and motivations of corrupt individuals

Emperor Motion Pictures is looking for a strong debut, opening the film wide across Hong Kong, China and Taiwan (as well as a limited North America and Australia debut through Magnum Films) this past weekend. Box office figures show To The Fore took a respectable US11.6m 4-day debut in the mainland, but was held to second place by Raman Hui’s Monster Hunt, which pulled in another US$40m in its fourth week of release. Outside of China, however, the film faces little domestic opposition.

In the sun-drenched Southern Taiwanese city of Kaoshiung, three friends, Ji-won (Choi Si-won), Ming (Eddie Peng) and Tian (Shawn Dou), all cycle for second-tier team, Radiant. As their sprinter, South Korean Ji-won is always the one to cross the finish line first, thanks to the efforts of his teammates to set the pace, obstruct the opposition and ensure he has a clear line to the front of the pack. Arrogant and ambitious, Ming fancies himself as a sprinter too, which causes friction, and also sets his sights Shiyao (Wang Luodan) a fellow cyclist from an all-girl team, even though Tian is also chasing her.

When financial difficulties force Radiant’s manager (Andrew Lin) to sell up, all three riders are snapped up by different premiere league teams, pitting the former teammates against one another. What follows is a series of episodic vignettes as Ji-won, Ming and Tian all struggle with the heightened pressures of the top flight and the strain it places on their relationships.

As expected from Lam, a veteran of thrillers as Beast Stalker (2008) and The Stool Pigeon (2010), tension and excitement are to the fore in the numerous racing sequences set across exotic locations which call to mind his 2012 international action pic The Viral Factor. Off the tracks, however, To The Fore is frequently weighed down by sporting cliches and extraneous sub-plots, to the extent that it often feels more like a soap opera omnibus than a structured two-hour feature film.

The script, by Lam with Lam Fung and Silver, feels somewhat superficial compared to Lam’s previous films, which have showed a repeated fascination with the psychology and motivations of individuals. In To The Fore, little time is spent on Ming, Ji-Won or Tian, and their only motivation - whether to train harder, break the rules or jeopardise their friendship - is to finish first on race day.

Crucially for a sports movie, To The Fore lacks a clear protagonist. Eddie Peng’s Ming is put forward as the film’s hero, but he can come across as spoilt and brattish throughout most of the film. Conversely, Ji-won’s clean-cut over-achiever has the same clinical, faultless persona as a Michael Schumacher or Roger Federer, and proves equally difficult to warm to. Tian is the quiet, earnest hard worker of the team, always beaten to the finish by his more outgoing teammates. His frustrations, whether on the track or in his love life, provoke a modicum of sympathy, but his willingness to turn to illegal means to achieve his goals somewhat tarnishes his appeal.

Pakie Chan’s cinematography adds a polished finish to the film, shooting in locations which range from the Swiss Alps to Mongolia’s Tengger Desert. Likewise, the editing team of Chan Ki-hop, Poon Hung-yiu and Pang Ching-hei makes the races feel kinetic, dangerous and coherent. Unfortunately, when the narrative slows down, so too does the film, which can look flat and garishly televisual when at rest.

The pin-up good looks and pre-existing fanbases of co-leads Eddie Peng (Unbeatable, Rise Of The Legend) and Super Junior-M boy-band member Choi Si-won (Dragon Blade, Helios) should help achieve a strong opening in Asian markets. Further afield, Dante Lam’s reputation may also fuel some interest, but the subject matter could ultimately prove a crucial stumbling block. To-date there has never been a commercially successful film centred on the world of professional cycling. Stephen Frears’ upcoming Lance Armstrong biopic The Program may finally buck that trend, but To The Fore seems ill-equipped to provide any substantial support.