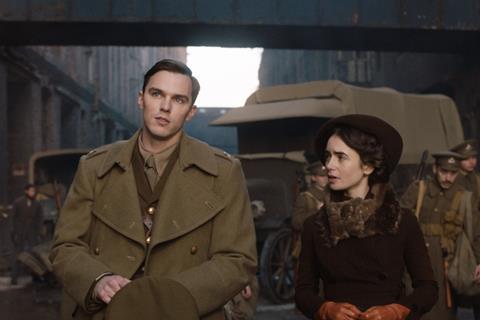 The friendship between four schoolboys in Birmingham is signalled as the source for the Fellowship, while the trenches of the Somme are a harbinger for the battles of Mordor in Tolkien. Dome Karukoski (Tom Of Finland) makes muddy going of a JRR Tolkien origins story which leaves the viewer none the wiser as to the high-fantasy writer’s origins. Many facets of his early life flit prettily across the screen, yet few are explored with rigor.

It’s frustrating to sit through this worthy yet leaden film and still emerge ignorant of what happened to the orphan Tolkein’s father, for example, or why his mother died, or even to know that she had been cut off by her family for converting to Catholicism, explaining the Tolkein brothers’ diminished circumstances and the ubiquitous presence of the priest Father Francis-Xavier (Colm Meany) for the rest of the film. Only the young linguist’s (Nicholas Hoult) romance with fellow orphan Edith (Lily Collins) is explored with any real depth in this disappointing period piece. Fantasy fans and streaming services should comprise its best audience.

An essential problem with Tolkien is its tone: you could call it solemn, reverential or even hagiographic, but essentially it topples a script which doesn’t bear up to all the worthiness. The story by David Gleeson and Stephen Beresford, told in flashback from the battlefield of the Somme, focuses on the four Birmingham schoolboys – the Barrovians – who become firm friends and form secret arts and literature fellowship the TCBS (Tea Club and Barrovian Society, named for their local tea rooms) when John Ronald Ruel Tolkein was about 16 years-old. (Nicolas Hoult, it may be observed, is almost 30.)

Woven around this is a further flashback to the death of Tolkien’s mother, the move to a boarding house with his younger brother, his star-crossed romance with Edith, his fondness for medieval literature and uncanny facility with languages and admission to Oxford, where he changes courses to study with a cunning old linguist played by Derek Jacobi. He starts to make up languages and scribble drawings which will become The Hobbit.

The camera roves back and forth to the Somme, where two of his childhood friends – in particular, the poet Geoffrey Smith (Anthony Boyle), who seems to be in love with Tolkein – are missing, so he struggles through the muck with his majordomo (Craig Roberts) to find them, which seems highly unlikely, and, needless to say, didn’t happen. (Tolkien later meets with Smith’s censorious mother and publishes a book of his poetry, to add another subplot to the film).

Every facet of this story is related with such great reverence that even the exuberant sequences with the schoolboys, in which they read each other poetry and jump about the sofas, come across as pompous: one starts to long for an Inklings debate on theology in an Oxford pub for “light relief”. The fault doesn’t lie with Hoult, Collins or the other boys – they’ve had to work with what they’ve been given and it’s too much, without ever really being enough.

This project was not authorised by Tolkien’s family, but neither is it anything less than adoringly reverential of its central character, and it’s very well made. A lot of time and effort has gone into recreating the Victorian-era Barrovian tea rooms, for example, the Somme sequences – with their flashes of Sauron-ish monsters and future terror – are impressive and the wallpaper in the boarding house is very pleasing. Still, though, it should be noted that Tolkien vehemently denied that the First World War had anything to do with The Lord of the Rings. And if you’re looking at the wallpaper in a film, something is not right.

This is undoubtedly a serious-minded film and a genuine attempt on the part of the director to examine a legend of literature. Somehow the end product seems to realise that its focus – the four schoolboys and the romance – isn’t quite enough, and darts off wildly in all directions to compensate. The result is poor story-telling about a man who told some of the best tales ever put to paper.