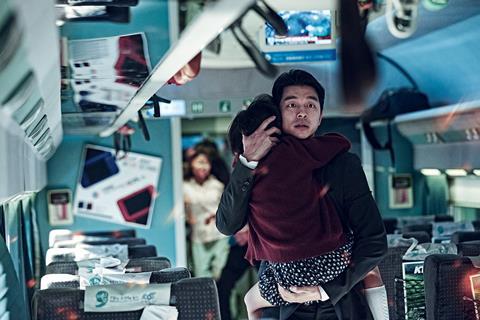 Snowpiercer meets World War Z in Yeon Sang-ho’s (The King of Pigs, The Fake) first live-action film as passengers on a high-speed train from Seoul to Busan don’t get the ride they paid for when a viral outbreak turns those infected into flesh-eating zombies. Although it lacks the layers evident in Yeon’s acclaimed animations (including the thematically-linked Seoul Station), this is still an entertaining ride, as well as providing political commentary when it overtly references the Korean government’s response to the MERS virus alongside commenting on the country’s class system.

The film works best when the passengers are on board the express train, battling it out for survival with the zombies

Much of this won’t resonate with international viewers unfamiliar with Korean politics and the social hierarchy there, but the film’s genre elements should go some way towards finding an audience in the international marketplace (even though it may be less violent than other zombie films). Its midnight slot in Cannes is the ideal launching pad for Train to Busan, and it should secure other festival invitations, especially those with an appetite for Asian genre cinema.

The film goes on release in Korea this summer, always a competitive season at the box office as local and Hollywood studios release their tentpole features. But like Bong Joon Ho’s critical and commercially successful Snowpiercer, curiosity could play a big part in its box office clout.  While it’s a few stops behind Bong’s adventure and unable to hit quite the same speed, it stands to drum up decent business locally.

The film follows on from the events in Yeon’s animation Seoul Station, where an unknown virus spread around Seoul’s biggest railway station. It’s the same outbreak that seeps into the train which departs Seoul for Busan (KTX 406) when an infected young woman boards the train.

Before this takes place, the film introduces one of the main characters Seok-woo (Gong Yoo), an affluent fund manager who cares more about his job than his daughter Su-an (Kim Su-ran) who wants to go to Busan to see her mother for her birthday. He reluctantly agrees to take her to his ex-wife, hoping to be back in Seoul by lunchtime. They board the train, and not long after it departs, the virus begins to run through sections of the carriages after which it’s a race for survival.

TV screens on board the train also inform passengers what’s happening in different parts of the country as the government claims to have everything under control. Martial law is in place, and the public is asked to refrain from spreading rumours – an apparent reference to the response to MERS in 2015.

Perhaps more striking is how characters from affluent conservative backgrounds are depicted as selfish and critical - the corporate executive is willing to throw others into the path of the zombies in order to save himself, for example.

Train to Busan is largely set on board the express, but as it is forced to make stops along the way, Yeon gets an opportunity to move to grander set-pieces, including aerial shots which give context to the scale of the outbreak. Many of these exterior scenes are more reliant on CGI, which is ironically where the film starts to lose steam. The CGI itself is competent and creative in places, but ultimately, the film works best when the passengers are on board battling it out for survival.

The cast is arguably the film’s weakest point. Gong Yoo (The Suspect) comes across rather blandly as the film’s main lead, whereas the normally terrific Jung Yoo-mi (Our Sunhi) and Kim Su-ran (Hide and Seek) are not given a great deal to work with. Ma Dong-suk (One on One) turns out to be the star of the show as he punches his way through the train.