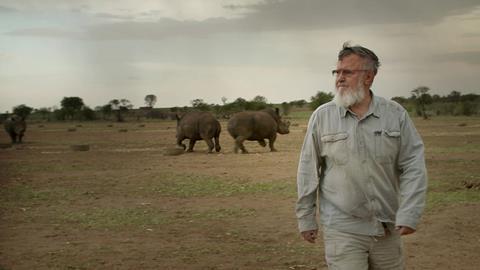 Is big-game hunting a mere excuse to kill—a murderous sport for rich people to gun down animals and display the stuffed carcasses on their walls as emblems of pride and power? Or is it, contrary to what you might think, the key to saving endangered species? This is the controversial crux of Narco Cultura director Shaul Schwarz’s sprawling, complex and beautifully lensed documentary about the tensions that exist between wild-life conservation and the global hunting industry.

Some issues, Trophy powerfully conveys, are bigger and broader than they initially appear.

Despite its simple single-word title, Trophy is a multidimensional look at an issue with sometimes competing and contradictory stances, pulling the viewer in myriad ways: at one point, audiences might be crying over a dead rhino; at another, they’ll be shedding a tears along with the wild-life farmer who, despite offering up his animals for slaughter, believes it’s the only way to sustain them.

For that reason, Trophy may be a challenging film to market—it may not go over as well with the animal-rights activists that made Blackfish such a hit. But acquired by The Orchard and CNN Films for North American release and already pre-sold throughout the world, it should get a significant platform from which to engender debate, along with strong critical and film festival support to ensure a healthy ancillary life.

Trophy skillfully intermixes different characters and groups, all of whom have a huge stake in the hunting and trading of big-game animals. First, we meet Texan sheep breeder, Philip Glass, a devout Christian who believes God gave man dominion over the animals. In the opening scenes, he’s congratulating his young son on killing his first deer (“That’s a textbook shot, Jaspar,” he says with pride) and speaks passionately about his mission to kill and collect trophies of the “Big Five” (elephant, buffalo, lion, leopard, and rhino).

Then, there’s South African farmer John Hume, a self-described conservationist and the largest private rhino breeder in the world. Showing deep love and affection for his rhinos, Hume forcefully argues that the legalisation of the trade in rhino horn is the best way to save the animals from extinction.

In addition to Glass and Hume, Schwarz, working with co-director Christina Clusiau, adds in other layers, further expanding upon the issue: there are other hunters, less sensitive and humble than Glass, who drink beers while shooting a crocodile in the head (“let’s party!”); a Zimbabwean anti-poaching officer who voices the film’s biggest irony (“We’re fighting to save something so we can kill it”); the African villagers who depend on the animals for meat; sensible conservation experts who suggest the new paradigm of conservation hunting has helped restore the big-game ecosystem; and passionate animal-rights activists who criticise the practice as murder for profit, plain and simple.

But nothing is so straightforward in Schwarz’s view. While there is no way to argue with the terrible, whimpering sound of an elephant slowly dying before your eyes, as the film vividly depicts, Trophy also suggests there are no easy answers to complex problems.

The film also strives to paint a sympathetic and even-handed portrait of its main characters and constituencies. While this tone may be less partisan and even dispassionate, it goes along with the documentary’s precise, polished and artful visual and essayistic style. During one stunning moment, the camera rises straight up over its subjects to reveal a wide picture of death and unquenched African earth that seems to transcend polarising arguments: Some issues, Trophy powerfully conveys, are bigger and broader than they initially appear.