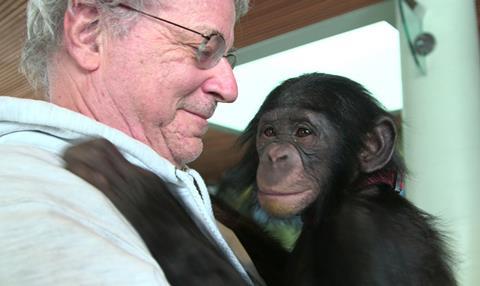 From acclaimed nonfiction filmmakers Hegedus and Pennebaker (The War Room, Elaine Stritch at Liberty) comes this surprisingly suspenseful and compelling courtroom thriller. Unlocking the Cage follows pioneering lawyer Steve Wise and his team as they seek to expand the legal definition of “personhood” to include certain animals, namely chimpanzees in New York State. But the film transcends its trappings as an animal rights issue documentary in the same way The War Room was not merely a campaign film. Simply put, Unlocking the Cage tells a great story.

Already set for US broadcast on HBO and co-produced by European broadcasters BBC, Arte France and VPRO, Hegedus and Pennebaker’s new documentary is a solid TV property, sure to appear on small screens globally. But without the cinematic qualities of many theatrical docs, or the sensationalistic tactics of a film such as Blackfish, it’s unlikely Unlocking the Cage will find much theatrical play.

It is to Hegedus and Pennebaker’s credit, however, that they don’t dwell on the more salacious aspects of animal cruelty. Though we see brief images of primates in tortuous circumstances and the film paints a sympathetic portrait of certain animals as intelligent beings, Unlocking the Cage isn’t sentimental in that sense. Ostensibly, it’s a legal drama, and what makes the film a rousing experience is its portrait of one man’s struggle for what he believes is justice.

Spanning over three years and filmed in the pair’s trademark observational “direct-cinema” style, the documentary begins with Wise’s first entrance into New York Supreme Court (“We have fucking done it,” he whispers to his colleague.) From there, the film backtracks to the preparations they have done to get to that pivotal point, from speaking to primatologists from Quebec to Iowa and finding the right chimpanzees to file writs of habeas corpus on their behalf, to staging a mock trial and filing cases in lower courts. In roller-coaster-like fashion, they encounter setbacks, challenges, and victories along the way.

One of the more engaging legal complications is the counter-argument that Wise’s cases concern animal welfare laws and not persons’ rights issues. The other legal issue lurking in the background of the film is the Supreme Court’s 2010 “Citizens United” decision, which granted personhood to corporations, giving a non-human entity the rights of human individuals. It comes up repeatedly in the film, most humorously in a clip from The Colbert Report, which had Wise on as a guest. “If Tommy [a chimpanzee] wants to have rights as a person,” jokes Stephen Colbert, “he should form his own corporation.”

It’s remarkable that Hegedus and Pennebaker succeed in making a film so compelling when neither the protagonist, Wise, nor the victims he seeks to protect, the animals, are particularly absorbing characters.

A middle-aged, straight-laced Boston lawyer, Wise himself doesn’t cut a particularly impressive figure. He comes across as sincere and mildly funny: “Justice is heavy,” he quips, carrying a load of case files into court. But he’s not nearly as charismatic as other Pennebaker subjects (say, Bob Dylan or Elaine Stritch). Certainly, he speaks articulately about his desire to let animals live as autonomous beings in the same way that humans do, and he makes a compelling argument for his cause. But aside from a short introduction to his background and his inspirations, the filmmakers aren’t interested in his motivations, faults or interior life. They are interested in what he stands for. As an old picture in Wise’s office declares, “We may be the only lawyers on earth whose clients are always innocent.”

It’s true the many primates in the movie, who are shown affectionately communicating in sign language and showing human-like emotions, deserve our caring, but unlike James Marsh’s Project Nim, for example, Unlocking the Cage isn’t about feeling for primates or dolphins or elephants. Rather, it’s a classic underdog story, effective for its engaging chronicle of outsiders trying to change the system.