Colonial-era Brazil is shot in lustrous black and white in Daniela Thoma’s story of tragedy, insanity and cruelty 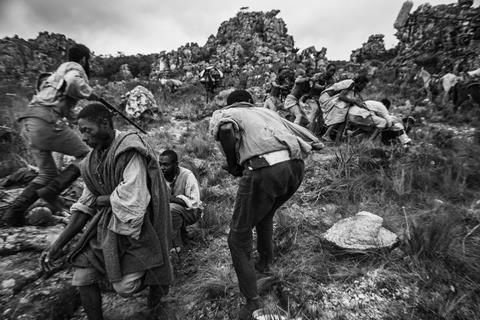 A regular collaborator of Walter Salles – she co-directed Foreign Land, Midnight and Linha de Passe – Daniela Thomas makes her solo directing debut with this striking study of racial and gender politics in colonial Brazil. The story unfolds against a backdrop which could serve as the setting to a Joseph Conrad novella. The year is 1821, shortly before Brazilian independence. And, viewed through the prism of the Portuguese owners of a tapped-out mine, it’s clear that the rot has set into the colonial rule of this isolated corner of Brazil’s interior. Tragedy, insanity and cruelty lurk in the slow rhythms of daily life.

This is an uncommonly handsome picture

Although the sparse dialogue and gradual build requires an investment on the part of the audience, this is an accomplished work. The technical package, in particular the arresting black and white cinematography and the intriguing, textured sound design, is first rate. The quality of the filmmaking should ensure interest both from festivals and specialist arthouse distributors.

Antonio (Adriano Carvalho) has found himself, through marriage, the owner of a failing estate. We first encounter him as he travels home, with a caravan of slaves and burdened mules. The sound design fills in the spaces left by the minimal dialogue: the bells on the beasts which echo the jangling chains on the men; the percussion of hooves and bare feet in the mud. Antonio hurries home to his pregnant wife, only to discover that she and the child have died during labour.

Antonio disappears to grieve; shortly afterwards his impoverished brother in law and family arrive to find an absent landlord, a babbling granny and a mining estate on the brink of ruin. Meanwhile, the community of slaves is unsettled by a group of new men who do not speak the same language but whose angry refusal to submit to bondage requires no translation. Thomas doesn’t provide subtitles for any of the words spoken by the new slaves. It’s a decision which makes sense on one hand but which does rob a key character of a voice.

Sinuous camerawork picks up on the building tensions within the slave community, and the sense of decay within the ruling family: frayed hems and ingrained dirt are evident beneath the trappings of former wealth. The generous wide screen photography makes the most of the geological potential of the backdrop – rock formations take on mocking, monstrous shapes as the sense of tension mounts – and of the meticulously composed interiors. This is an uncommonly handsome picture.

There is a slow build to the story, which gathers momentum in the second hour once Antonio has married Beatriz, the twelve-year-old niece of his late wife. Mindful of the tears of his child bride, Antonio repeatedly summons the slave Feliciana (Jai Baptista) to his bed. And Beatriz, still a girl on the cusp of adolescence, fills the long, lonely days with a flirtation with a boy her own age, Feliciana’s son Virgílio (Vinicius dos Anjos). It’s a dynamic which bares some similarities to that of William Oldroyd’s Lady Macbeth. And while it lacks the concentrated venom of Oldroyd’s picture, Vazante’s savage climax has a shock value of its own.