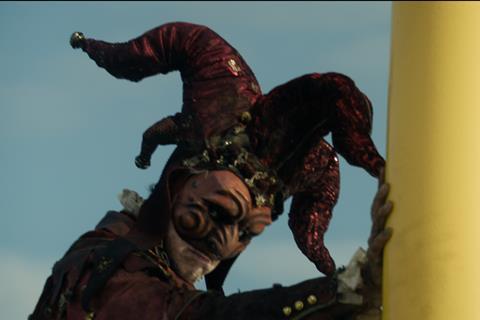 It was only a matter of time before there would be a coming-together of the giallo-inspired imagination of Spanish director Alex de la Iglesia and the Floating City, but as scarlet-hued, murderous Venice-set thrillers go, the director’s sixteenth feature is less Don’t Look Now and more ‘Don’t Look Too Closely’.

It’s spectacular flourishes of nastiness that Veneciafrenia does best

Featuring a charmless group of Spanish tourists who get into big, bloody trouble on a carnival-time trip to Venice, Veneciafrenia is the triumph of sometimes wonderful style over often banal substance, a technically impressive slasher that’s just too by-the-numbers. Fleetingly fun but otherwise forgettable, this is further testimony to the variability of a director whose oeuvre ranges wildly from the terrific (The Day Of The Beast) to the trite (The Bar). This is also the first instalment of ‘The Fear Collection’, a Sony/Amazon Prime horror feature film anthology to be made under de la Iglesia’s guidance.

For boldness and drama, if not for luridness, the striking title sequence, above a driving theme from Roque Banos, outdoes most of what comes after. The first minute sets the tone. Following a glimpse of graffiti saying ‘Cruise Ships Out’, a young tourist is battered to death using his own camera by a killer in carnival mask as onlookers applaud, believing it’s a set-up. There’s a world of meaning in the scene, but the urgently paced Veneciafrenia isn’t about to explore it, instead pressing on to the arrival of five young travellers, including smart Isa (Ingrid Garcia-Jonsson), her dimwitted brother Jose (Alberto Bang) — quote: “Who’s Marie Antoinette?” — who promptly loses his phone by falling into a canal, and three slightly indistinguishable others who we suspect will shortly be added to the tally of deaths in Venice.

Black humour is a key element in the de la Iglesia portfolio and has often redeemed his films from their worst excesses, but on this occasion it’s pretty much absent. On their first evening, the inanely chattering quintet manage to annoy both viewers and Venetians alike before following a creepy masked figure called The Doctor (a deliciously over-the-top Cosmio Fusco) to a nightclub where, to the audience’s relief, Jose suddenly disappears. Much of the rest of the duration is dedicated to locating him, without his telephone — the script has no fear of such contrivances — assisted by lugubrious local policeman Brunelli (Armando de Razza) and gondolier Giacomo (Enrico lo Verso), who Isa quite understandably develops a thing for.

In acting terms, the Italians wipe the floor with the young Spaniards, with de Razza single-handedly responsible for the few moments of real intensity and gravitas that the film delivers and lo Verso oozing easy, aloof charm as the one local who’s prepared to believe the visitors’ version of events. By contrast, both poor Nico Romero as Isa’s fiance Alfonso and their relationship are totally superfluous.

Tourists are being killed by a masked local who stands behind doors hung with carnival masks and runs them through with a rapier. It’s spectacular flourishes of nastiness like this that Veneciafrenia does best: one extended set piece in a dark, decaying theatre features a bloodied corpse strung up by hooks and being played like a puppet from the rafters. This same beautifully shot sequence is a dream for de la Iglesia art direction stalwarts Jose Luis Arrizabalaga and Arturo Garcia: it features, along with lots of corpses, a massive and fabulously gratuitous backdrop of William Blake’s great painting ‘Nebuchadnezzar’.

The premise, which is grounded in fact, is really interesting — that the people of Venice have effectively risen up against the mass tourism that is killing it. Ironically, Veneciafrenia itself might cause further damage as its target audience is seduced by Pablo Rosso’s striking, swooping renderings of the city’s sunlit canals, its lavishly appointed interiors and its misty alleyways. But the film’s element of homage to the city’s glories is diluted by its reliance on tired Venetian tropes, including an ancient magic potion, cryptic symbols and even the obligatory vague reference to a secret society. It’s hard not to draw the conclusion that if Venice is serious about keeping the cruise ships out, it should think twice about allowing movies like Veneciafrenia to be filmed there.