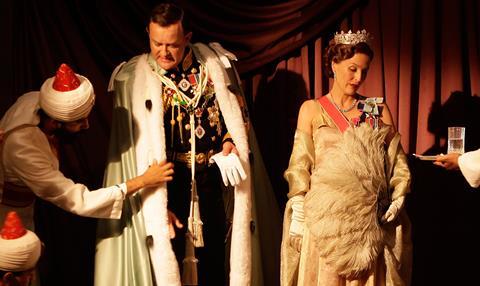 With this ambitious account of the backstage manipulation and human cost of Partition, Gurinder Chadha tackles a bigger canvas than previously. She meets the challenge with flair – Viceroy’s House, with its jostling below-stairs tensions and colonial gamesmanship is an accessible blend of a Merchant Ivory period piece with the political edge of Amma Assante’s A United Kingdom.

The contrast between the brittle propriety of the British social events and the simmering tensions at an Indian engagement party is nicely handled.

A Hindu – Muslim romance at the heart of the story is too neatly schematic to fully persuade as anything other than a narrative device, but the use of the microcosm of the last Viceroy’s household staff as a window into the broader tensions facing India is effective.

The theme – the violent consequences of politicians peddling hate and division – makes this a timely release. But although the film is a little heavy on scene-setting exposition in the first twenty minutes, this very watchable picture never feels as though it is lecturing the audience. In fact, one of the main strengths of Chadha’s approach is the way she weaves the historical detail into the richly textured story with such a light touch. Commercial prospects, particularly in territories with a sizeable Indian diaspora population, should be solid.

The film opens by introducing us to several newcomers to the Viceroy’s House in Delhi, 1947. Lord Mountbatten (Hugh Bonneville), his wife Edwina (Gillian Anderson) and his daughter Pamela (Lily Travers) arrive at the palatial residence at the same time as Jeet (Manish Dayal), an ambitious Punjabi former policeman who takes up a position as one of Mountbatten’s manservants. Mountbatten has been assigned the job of the last Viceroy, the man who will oversee the transition to Indian independence after roughly three hundred years of British colonial rule.

The tirelessly charming Edwina falls swiftly in love with the country and its people, dismissing a racist British staff member with the cut-glass put down: “Perhaps your very able gifts would be better used in Surrey.”

The whole of the sub-continent waits to see how Mountbatten will manage the transition. And through the five hundred or so household staff, a mix of Hindu, Muslim and Sikh, we see the tensions that threaten to wrench the country apart played out on a small scale. On the front line is Jeet, who is reunited with the Muslim girl he fell in love with two years previously. Aalia (Huma Qureshi), who also works closely with the Mountbatten family, is torn between her love for Jeet and her sense of duty to her blind father (the late Om Puri).

The contrast between the brittle propriety of the British social events and the simmering tensions at an Indian engagement party is nicely handled. Chadha makes the most of the richly detailed production design of the backdrop. The score, by A. R. Rahman, is also impressive – the sturdy Western orchestral motifs gradually give way to wistful Indian influences as the date for independence draws closer.

There are some moments which lack subtlety. An extended sequence in which everything within Viceroy’s House, from the cutlery to the library to the staff members, is divided between India and Pakistan makes its point a little too emphatically. And the ending, while it delivers a note of hope, feels a little convenient. Still, this is a vivid and coherent account of an impossibly complex period of Indian history which is driven by fine performances by Dayal, Bonneville and, particularly, Anderson.