'War For The Planet Of The Apes': Review 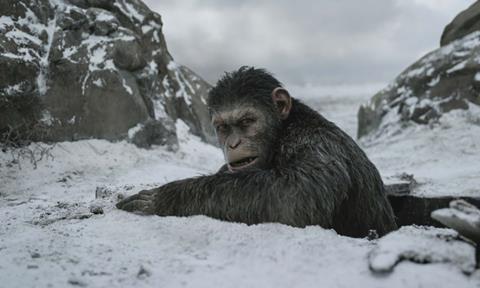 For the third Planet of the Apes film – and final, at least in this current iteration – director Matt Reeves has swung out on a limb again to deliver a clever, well-acted summer blockbuster which is an involving cross between a classic Western revenge and a war movie, dropping somewhere between The Searchers, Platoon and Watership Down, if that can be imagined. The fact it is mostly an all-simian affair, apart from a committed performance by Woody Harrelson in a Colonel Kurtz-like role, isn’t to its detriment. But at 142 minutes and without any significant female characters, the audience for this Fox summer gamble will most decidedly be self-selecting, even if reviews are palpably warm.

For all that Andy Serkis has accomplished in a career which has broken down boundaries for his craft, Caesar may well be his greatest testament.

As this summer’s franchises splutter and self-combust (The Mummy, Transformers), here’s one which (like its all-female counterpart Wonder Woman) is smart and noble-minded, happy to take its time to grow into a heartfelt culmination of the saga which began with 2011’s Rise Of The Planet Of The Apes. In the six years since Andy Serkis first played the simian hero Caesar, advances in technology seem to have lightened his physical load, even as the weight of the world lies heavily on his character’s shoulders.  Again, he delivers more of an embodiment than a motion capture performance, surrounded by physical, emotive turns from actors including Steve Zahn and Terry Notary, recently seen in Ruben Ostlund’s Palme D’Or winning The Square (to judge from the credits, his children are also climbing up the family tree).

Using an awe-inspiring natural Canadian backdrop (British Columbia) which seems to derive inspiration from The Revenant, Reeves sets the characters he knows so well from directing 2014’s Dawn Of The Planet Of The Apes on an epic conclusion to Fox’s saga (the last took over $700m worldwide). It’s magisterial in scope, a trek in which Caesar almost takes on Moses-like characteristics to try deliver his race from unceasing human persecution. Behind the camera too, this is a film which aims high: from the naturalistic effects, courtesy of Weta again, to the screen-eating vistas but, most unexpectedly, the rhythmic blending of Michael Giaccino’s fine score with sign- and spoken-language, which Reeves uses deftly to shift the mood and rachet up the tension.

The director himself steps in to co-write with series regular Mark Bomback and the masculine tone is set, at least to start, with a Platoon-like sequence in which human soldiers, led remotely by the ‘Colonel’ (Harrelson) attempt to storm a den of fierce apes in the deep jungle. Subtitling needs to work hard to run through the Simian Virus of 15 years ago, the Caesar-vs-Koba feud, and the reappearance of Cornelius, Casear’s son, and while it’s not absolutely vital to have watched the first two instalments, a working familiarity with the Apes trilogy might help in the early stages.

The feeling is strictly military, with the soldiers’ call sign for apes being “kong” - not a million miles from Viet Cong. They’ve daubed slogans like “monkey killer” on their helmets, while simian turncoats/helpers are called “donkeys” by these reliably fallible humans. The mood is grim as Cesar faces up to what has always been inevitable - an all-out war with his human adversaries.

Yet Bomback and Reeves do eventually allow a mute human girl (Amiah Miller) to represent some sort of hope, as the Simian Virus mutates and Cesar and his tight-knit crew decide they will no longer hide but seek out their enemy. Political parallels can be drawn, of course, with the Colonel building a wall in his frontier outpost, and this a dark film at heart. Cinematic references are self-evident - quest movies and literature from Star Wars to The Hobbit, old-style Westerns and even back to The Ten Commandments. The epic journey on which Cesar embarks is forged within the classical cinema framework, freshened by the fact that our heroes belong to another species, forcing the audience to shift preconceptions and re-engage afresh. And it’s engrossing every inch of the way, with casualties, infighting, character flaws, war mongering, and some delicious grandstanding from Harrelson.

While there is so much to be said technically of this film, from production design all the way through to sound, music and the magical effects which enhance the piece - yet never dominate - War For The Planet Of The Apes truly belongs to its actors, who commit unfalteringly to their physical evocations. For all that Andy Serkis has accomplished in a career which has broken down boundaries for his craft, Caesar may well be his greatest testament. Ultimately, this is a big-screen performance of heroic proportions in which viewers can not see the man for the ape or the ape for the story of man’s self-inflicted destruction.

Screenplay: Mark Bomback, Matt Reeves, from characters created by Rick Jaffa and Amanda Silver, drawn from Planet of the Apes by Pierre Boulle