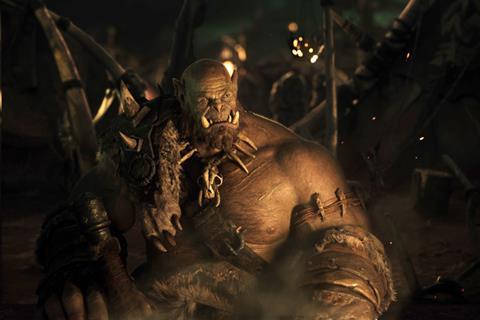 The orcs, wizards and warriors of Warcraft clomp determinedly onto the big screen in Legendary Pictures’ live-action take on the 20-year-old video game series. The result is a 3D sword-and-sorcery adventure whose CG-heavy look and cartoonish action should work for gamers and hardcore genre fans, even if the flat-footed drama may put off mainstream audiences and limits the chances of the property – already turned into novels and comic books - becoming a long-running movie franchise.

Box office prospects are best in the international arena and Universal Pictures is launching the film in a number of territories over the last weekend in May, two weeks ahead of the June 10 North American release. Opening after a string of similarly targeted comic book movies could limit its reach, though sharing some genre buzz with TV smash Game of Thrones might prove a marketing plus.

Focusing on the beginnings of the Warcraft saga, the film echoes the structure of the game - which really took off in 2004 as a ‘massively multiplayer online role-playing game’ in which players choose an avatar from one side of the conflict or the other – by telling its story from both human and orc viewpoints.

Looking like early ancestors of the Incredible Hulk, the orcs are eight-foot tall monsters with tusks and a nasty attitude. When a power-hungry wizard uses magic to open a portal on the orcs’ dying home planet, clan chieftain and family man Durotan (played, with plenty of CG enhancement, by the UK’s Toby Kebbell, from Dawn of the Planet of the Apes) joins hundreds of his muscle-bound mates in the invasion of Azeroth, an Earth-like world with all the trappings of medieval Europe.

In the hands of director and co-writer Duncan Jones (who previously earned plaudits for sci-fi outings Source Code and Moon), the film takes a long time to build dramatic momentum and gets interrupted by what seem like unnecessary plot points; some of them, perhaps, geared towards potential sequels.

The CG and motion capture work that goes into the orc characters and most of the sets is impressive - Life of Pi Oscar winner Bill Westenhofer leads the visual effects team – but it doesn’t always meld easily with the live action.

The film (rated PG-13 in the US) ends up feeling unconvincing and generic, with nothing to compare to either the dramatic heft of Peter Jackson’s Lord of the Rings trilogy or the raunch and gore of Game of Thrones.