'We Were Just Playing': Munich Review

Two boys, one German and one Ukranian, forge an unlikely friendship 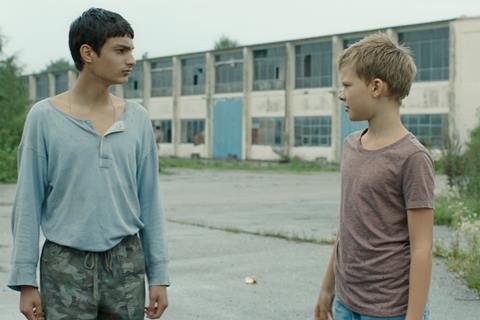 We Were Just Playing

Eternal aspects of family strife are folded into less familiar elements of modern European life in We Were Just Playing (Wir Haben Nur Gespielt). The third feature from Ann-Kristin Reyels (Hounds, Frontera) is an intriguing, quietly observed rite of passage drama marked by able performances and an atmospheric use of backwater locations.Low-key and underdeveloped in places, it should still find a welcome among festivals; especially those aimed at younger audiences.

Reyels son Finn-Henry portrays Jona, a lonely 10 year-old who is spending a restless summer holiday with his mother Eva (Silke Bondenbender) and her new partner Robert (Godehard Giese). Everyone is walking on eggshells as they adjust to the new family dynamic. Jona is frequently left to his own devices during their stay in a part of rural Germany close to the border with the Czech Republic. Drifting to the nearest village and a group of children playing football, Jonah is especially drawn to the slightly older, intimidating Roman ( Roman Bkhavnani); a Ukranian boy at the mercy of a local thug.

The contrast in their personalities reflects the two worlds that clash when they meet. Jona is a naive and trusting innocent, wide-eyed in a world that feels like a big adventure playground. Roman is wary and watchful, carrying the cynicism of someone who has witnessed too much for their tender years. We are left to imagine what he is made to do for the mysterious male strangers who welcome him into their cars, reminding him first to wash his hands. Initial hostility between the two boys thaws into a tentative friendship as they ramble through the woods and devise an initiation ceremony in which they will address their greatest fears.

We Were Just Playing offers a strong sense of place. Jona seems like an alien visitor when he strays across the border from the wealth and security of his life in Germany to the dangers of what feels like a lawless frontier. The local woods, with their bullet-strewn, abandoned fortifications, could almost be an enchanted forest. Sound design that captures the crackle of gravel paths, the hum of a spinning bicycle wheel or the quiet of Jona’s solitude, adds to the atmosphere.

The film is on sure ground when it focuses on the unexpected union of these very different lives. Finn-Henry Reyels is especially convincing as a youngster grappling with a testing period of adjustment in which his father is entirely absent but the good intentions of the patient, kindly Robert are no acceptable substitute. He convincingly conveys the shifting moods of resentment and embarrassment, looking away in distress as his mother and Robert affectionately kiss.

Some of the plotting is less assured with the adult characters thinly sketched and the closing sections of the story start to drift towards some inevitable tragedy. The result is a thoughtful, plaintive tale that works best in conveying the churning emotions of a youngster discovering that the world is more complicated and more dangerous than he could have ever imagined.