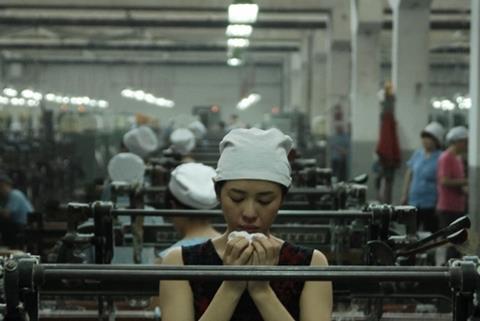 The story of a poor, terminally ill factory worker in mainland China develops in unexpected ways in Weaving Girl, a touching, small-scale drama featuring a strong performance from the actress Yu Nan.

Yu Nan gives the film a great deal of its energy in her portrayal of a strong-willed, passionate woman forced to give up on life too early.

Director Wang Quanan’s follow-up to Tuya’s Marriage, which unexpectedly took home the 2007 Berlin Golden Bear, Weaving Girl was bypassed by top festivals but could have an interesting second life as a specialty release. Although it initially seems to be an indictment of working conditions in China, the film ends up telling a personal story that, although not as politically incisive, will strike a more universal chord for audiences around the globe.

Winner of the Jury Grand Prix and FIPRESCI award at this year’s Montreal World Film Festival, Weaving Girl should travel widely on the festival circuit and may also appeal to older viewers and cinephiles in the West.

Confident and outspoken, Li Li (Yu) works in a textile factory, a strict institution that docks workers’ pay for even minor infringements. After suffering frequent nosebleeds and even passing out, she and her husband visit a hospital. The doctor tells her it is a minor condition, but then informs her husband in private that Li Li suffers from leukemia - a conversation she overhears. Without enough money to treat the disease, Li Li gives up hope of a cure.

With the factory in danger of closure, Li Li joins some of her coworkers at the local dance hall, where she can earn 10 yuan per song by dancing with strangers. A conversation with a travel agent gives her the idea to take a trip, and she announces to her husband and young son that she will visit Beijing. Secretly, though, she intends to track down a man she had hoped to marry in her youth.

Wang has a talent for incisive cinematic touches that lend colour to his story. In the opening scene he uses the mechanical din of the textile factory like a musical instrument, capturing both the chaos of the workplace and Li Li’s fury at having her pay docked. Other sequences are more modest in their presentation but stand out for their quiet force, such as Li Li’s reunion with her old lover, or a scene where she and her neighbours are out riding bicycles.

Yu Nan gives the film a great deal of its energy in her portrayal of a strong-willed, passionate woman forced to give up on life too early. Notably, even as her character becomes resigned to her fate, she projects an inner strength that prevents Li Li from seeming in any way diminished.

Cinematography by Wang’s regular collaborator Lutz Reitemeier is mostly restrained. The film’s ending contains perhaps one too many flourishes on the part of the director, but a rendition of the folk song Weaving Girl by the Soviet Red Army Chorus during the end credits is stirring.